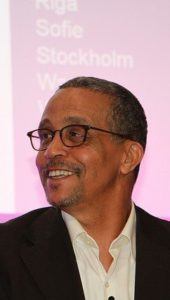 , author of The African Equation, was one of six writers invited to take part in BBC Radio 4’s Letters from Europe series in February 2015. In his essay, the Algerian author reflects on personal identity, in light of the challenges currently facing Europe.

Khadra’s essay is reproduced in full below by kind permission of BBC Radio 4. The audio version, read by Anton Lesser, is available on BBC iPlayer

Now that the indignation has died down, the crowds dispersed and the hearses have returned to the undertakers, my thoughts turn to Charlie, to the executed hostages and I ask myself: how did we reach these extremes? Why is the world gradually losing its bearings? How has killing come to form an integral part of political debate and an inescapable part of certain ideologies? It is true that we can identify the culprits, but is that sufficient to exonerate us of our own responsibility and faults?

After the tragedy that struck France, everyone is saying that nothing will be the same again. I can’t see how things will change since we refuse to question ourselves.

Some years ago I was on the front line in the fight against the fundamentalist violence in my own country, Algeria. As an army officer, I buried my best friends, my soldiers and my superiors, while expecting that at any moment I would be felled in my turn by a homemade bomb or a bullet. Every day it was the apocalypse, and every night, a descent into hell. I could see my country being transformed into a nightmarish arena where brother massacred brother, where sons sacrificed their own fathers, and where family members turned on one another in the most appalling backlash of tears and blood. At times, brutal reality extinguished all hope, and prayers were shot down on the wing by the snipers of discord. We Algerians at war, we were left to our own devices, cut off from the rest of the world, immured in our own private hell, the bloodiest ever seen in the Mediterranean. The most tragic part of it was that we were ALONE as the ‘people with consciences’ speculated about our misfortune, whilst treating heroes as criminals and our executioners as scapegoats.

I remember in 1994, when my Austrian publisher told me they would be bringing out my book in two years’ time, I burst out laughing. Two years? To me, convinced that I would die the next day, or maybe the next week, two years seemed absolutely inconceivable. Every day I was waking up amid the cries of a people in the throes of being killed. I bent over the bodies of children, of women, and of old men whose only crime had been to find themselves in the way of the murderous hordes.

And I wonder today if anything has been learnt from our misfortune. Apparently not. Nations are roused only by their own pain, according only a passing interest to the suffering of others. We no longer learn lessons from events. Withdrawn in our own little worlds, we are convinced that the catastrophes which strike elsewhere will not reach us. We believe our peace of mind is a right that cannot be taken from us. We go about our business without bothering ourselves with what is destroying the lives of others. In our selfish little bubble of happiness, we erect statues in public squares, we hold big parades on wide boulevards and enjoy ourselves without worrying about the night terrors that torment our neighbours. Something within makes us inattentive to the evil influences in the world and we become captive to our own egotism. Until, without warning, disaster hits us full in the face and we waste time wondering why. And when we can’t find the answer, we look for someone to blame, never mind if we get it wrong!

What is racism if not a confusion of concepts, a loss of our bearings, a withdrawal into ourselves, that is instinctive, animal even?

I have lived in Europe for fifteen years. I see how, with disconcerting ease, the prominence of racism is growing. Decried and condemned yesterday, today racism demands to be validated, openly on view like a trophy; some are racists with a zeal that brooks no contradiction while others flaunt their racism as if it transcends culture. But what is racism if not a confusion of concepts, a loss of our bearings, a withdrawal into ourselves, that is instinctive, animal even?  When people fail to make allowances, and refuse to separate the wheat from the chaff, it means they have chosen the path of unreason, of irresponsibility, of inhumanity. These attitudes debase us, reduce us to insignificance and leave us at the mercy of our own frustrations even as we try to overcome them. Hate is an admission of weakness. It clouds our judgement, distorts our objectivity and all it achieves is to prevent us from attaining maturity of thought.

I don’t know what noxious influence is causing patriotism to mutate into hate and exclusion to be practiced like a religious calling. It is but a small step from the stigmatisation of minority communities to the call for deportations, and one that many are demanding to be taken. From a linguistic perspective, outrageous suggestions are dressed up as expressions of goodwill. Thus discrimination becomes ‘positive’, and war ‘pre-emptive’, and all sorts of barbarisms suddenly acquire respectable definitions. Is it that language is losing its meaning or are we seeing the collapse of good sense?

I dare to believe that we are merely talking about a temporary confusion of language and that true and honest words will find their place again in intercultural dialogue, a dialogue as long-awaited as the coming of the Messiah.

What was it that happened in France which suddenly plunged the entire planet into mourning? What does the formidable outpouring of solidarity that mobilised peoples and governments around the Paris terror attacks actually signify? Why do people ask me only to be Charlie when I am hundreds of murdered Algerian journalists, 200,000 massacred civilians, 15,000 soldiers and policemen killed in action without any appeals to the conscience of the world?

A frightening thought occurs to me: what are we turning into? Why do we react in different ways to atrocity? Are some deaths of less consequence than others? I am besieged by memories. I remember the scepticism of certain journalists towards my account of the 1990s. ‘It’s going to happen to you as well,’ I insisted. ‘Algeria did not fight to save itself, but to spare the entire world from knowing the hell that is annihilating our population.’

Danger brews first inside us before reaching the street

Many people believed that the Algerian ordeal was endemic to that country, the shipwreck of an irresponsible banana republic, lacking in structure and ambition. In short, they believe, what happened to Algeria was the logical conclusion of its own misguided, immature and dangerous third-world ways. As if misfortune only strikes those who deserve it. When I consider what really separates us from one another, I notice that borders, the real boundaries, are in our heads. Because danger brews first inside us before reaching the street.

In the aftermath of the Paris attacks, have we measured the impact of the confused muddling of identities that made them possible? I don’t think so. Dozens of mosques have suffered attacks of varying seriousness. The Muslim community is fearful now, faces are clouded by doubt. What is going to happen? Society is so fragile that anything could throw it into chaos. Is the West in a position to manage its own anger intelligently? We cannot be sure. For years, in television studios as well as in brasseries, confused talk sounds ever louder. Xenophobia is much to the fore and Islamophobia is used to boost ratings. Those who love to stir up ill-feeling are the favoured guests of TV hosts, their scurrilous writings become bestsellers and they create huge social media buzz. Insult has become an art form and the foulest diatribes fascinate and excite the public.

Then we wonder, the day after a terror attack, why fantasy has become reality?

There’s an African proverb that says, ‘He who does not know that he does not know is a danger.’ This is true. The worst peril that stalks mankind, more than ignorance, is misunderstanding. How many philosophers, writers, analysts have spoken on TV, on radio and have written in the press to give us their explanation of something they have never understood, thereby sowing fear in our hearts? How many opportunists have played on the fears of the population for their own commercial ends?

How can we allow ourselves to fail to distinguish between a religion and an ideology, a believer and a crank, a well-meaning Muslim and an indoctrinated terrorist?

Although that’s not the real question. What upsets me, as a being endowed with reason, is the following: In these times how can we allow ourselves to fail to distinguish between a religion and an ideology, a believer and a crank, a well-meaning Muslim and an indoctrinated terrorist? That is the real question. Has the West become so colour-blind, or does it indulge a squint that permits it only to see things in a way that suits?

I believe people are capable of discernment. They know how to make allowances. They know the world isn’t perfect, that there are good people everywhere and sometimes bad people, that it makes sense not to stigmatise an entire nation because one of their number has committed a crime. People know that crime is a misdeed, not an identity, and that you should only judge others by what they do and not by who they are.

In order to end the misunderstandings, lucidity and clear-headedness are essential. Because folly is the mother of all excess and injustice the goddess of disaster. When pretended knowledge stops supplanting erudition, when facts trump allegations, when we learn to listen to those who speak the truth instead of lending an ear to charlatans, we will finally be able to hope for better tomorrows. I know it will be difficult, but not impossible.

To finish, I return to what torments all people: the murderous pandemic that is terrorism. It is not an inevitability. Terrorism is a social dysfunction, that’s all. In order to defuse it, we must locate its origins, its motivations, its damaged nature. Let us first begin by isolating jihadism from the community it believes it defends and from the religion it purports to reinforce. Jihadism is only the mad part of religion – it and it alone is responsible for its crimes. Jihadism is the number one enemy of Muslims and must not be associated with them. Let us not look for its allies among its victims, for there are none. And especially, let’s stop selective indignation and instead stand shoulder to shoulder with all those who suffer, whatever their culture, their continent or the colour of their skin. That is our only chance to recover our share of humanity and to be able to pass on to future generations a less cruel, brighter world.

Yasmina Khadra is the author of The African Equation, The Dictator’s Last Night and The Angels Die

Posted on February 26, 2015 by Emily in Guest Blog, Yasmina Khadra