Romain Slocombe began his career as an illustrator working on comics and counter-culture magazines such as Métal hurlant in the late seventies and early eighties. As an artist, he was closely involved with the punk Bazooka collective, having studied alongside many of its members at the École des Beaux-Arts in Paris. In 1983 he wrote a graphic novel, produced by the same publisher as Métal hurlant. He went on to write many books for children and young adults, returning to novels for adults after his numerous trips to Japan in the 1990s. Un été japonais was published in 2000 as part of Gallimard’s série noire, inaugurating a prolific writing period which saw another 15 novels published.

Common themes run through Slocombe’s various fields of work, with the different artistic disciplines – visual and literary – informing one another. His interest in pre-1960 photography, cars and clothing allowed him to build a very clear picture in his mind when writing Monsieur le Commandant, his first novel to be published in English (UK publication Sept 13). War, eroticism and medical fetishism, in particular the notion of female beauty under threat, are photographic interests which have also made their way into his writing.

An Interview with Romain Slocombe 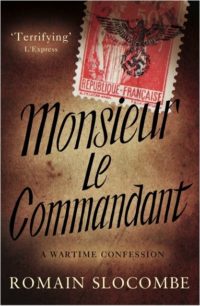