What We’re Reading This Month 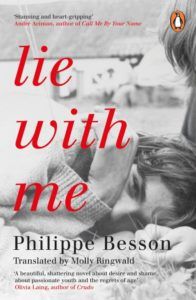 LIE WITH ME by Philippe Besson t. Molly Ringwald

I picked this off the table at Belgravia Books, mostly out of interest in seeing Molly Ringwald, of Breakfast Club fame, listed as the translator – and she does a good job! Lie With Me takes place in a provincial French town in the south-west. It is a tale of the narrator’s first love, for a beautiful but unavailable boy at school named Thomas Andrieu. Thomas is from a working-class family of dairy farmers, while the narrator is the son of the headmaster and destined to leave the village. They are an unlikely match. Yet in the inexplicable way that these things sometimes happen, match they do.

Memories surface and intermingle in a fashion not dissimilar to the writing of Marguerite Duras, creating a moving tapestry of the past. But Thomas feels the social constraints of 1980s France, and ultimately, their relationship cannot last. Years later, a chance encounter brings these memories flooding back. Lie With Me is a poignant tribute to the beauty and ache of love.

THE LADY IN THE CAR WITH GLASSES AND A GUN by Sébastien Japrisot t. Helen Weaver

One of our own titles that has been on my pile ever since I started at Gallic, this month I finally got round to reading Japrisot’s The Lady in the Car with Glasses and a Gun. And it was worth the wait! Somewhere between psychological thriller and road trip fiction, it is the curious story of Dany Longo, a secretary at an advertising agency in Paris who takes to the road in her boss’s stylish Thunderbird car on a summer’s day. But, as she gets further south, strangers begin to tell her they saw her the day before. And there is a terrible surprise waiting for her in the boot of her car …

I loved the writing. Sharp, spare and sexy, Japrisot creates a dreamlike sense of reality that makes you wonder who is really in control – is it The Lady, or is something else going on? It is a cleverly structured novel from the often overlooked enfant terrible of French crime, transporting you to the sun-drenched roads of France. It’s an exhilarating read.

Marketing Coordinator Isabelle Flynn shares her reading this month – a forgotten classic and the latest blockbuster. 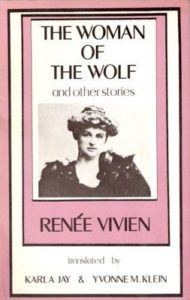 THE WOMAN OF THE WOLF & OTHER STORIES by Renee Vivien t. Karla Jay and Yvonne Klein

I read this stunning little collection as part of some research into an in-the-works project here at Gallic Books. Vivien was a flamboyant, hedonistic queer writer living in Paris at the end of the nineteenth century. The Woman of the Wolf is a collection of (very) short stories in which Vivien reworks familiar biblical and mythical images and themes into new, subversive stories.  My favourites include the titular story in which a self-absorbed male narrator meets a woman with a pet wolf aboard a ship, and insists on interpreting her hostility and apathy as flirty, girly game-playing – until she chooses to drown instead of being stuck in a lifeboat with him. I also enjoyed ‘Prince Charming’, about a woman who disguises herself as her twin brother in order to seduce and marry his childhood sweetheart.

The stories are confronting, and often violent, so definitely not for everyone, but I thoroughly enjoyed getting outside my comfort zone and reading a lost and little known woman writer. 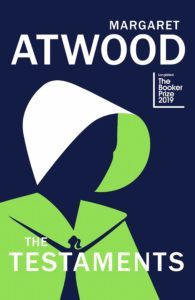 THE TESTAMENTS by Margaret Atwood

I read The Handmaid’s Tale way back in secondary school. I actually stole it from my English department stock room, but enough about my rebellious teenage years. It sparked a love affair with Atwood’s writing that has endured to this day. I’ve read thirteen other books by her and even took a whole module on her work at university! Naturally, when The Testaments was announced, I was over the moon. I attended the midnight release and saw her read the first few pages, and blitzed through this iconic sequel in just two days.

It’s not as literary as The Handmaid’s Tale, probably because Atwood is aware that many of her new readers are coming from the TV show. But it’s every bit as sinister and evocative, and written in a way that is easy to read while still showcasing Atwood’s ability to wield symbolism and language with the skill of a Jedi master. I loved it, and am delighted that Atwood can still wow her readers this far into her career.