We’re No Strangers to Historical Fiction

Historical fiction is one of Britain’s best loved genres. It certainly has a lot to offer. You can pick a country, a specific place, town or city, a century, a year, a month, a life! But why are we so fascinated with historical novels?

‘A great historical fiction book will transport you back to another time and place where you are surrounded by the customs and traditions of a world long gone. And the best part about historical fiction novels is the mix of the true and authentic with the fabricated and the fictional.’ – Bustle.com 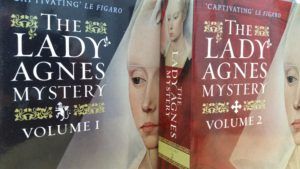 At Gallic we are no strangers to historical fiction. We can take you back to medieval France with The Lady Agnes Mystery Vol.1 and 2; or how about dipping into the 19th-century Napoleonic wars with Armand Cabasson’s The Officer’s Prey; or perhaps Claude Izner’s mysteries set in fin-de-siècle Paris are what you are looking for. And our latest addition will certainly appeal to those of you who enjoy being swept away to the courts of Europe’s most famous kings.

Just in time to prepare you for Versailles, the hotly anticipated ten-part French drama soon to be screened on the BBC, comes The Sun King Conspiracy. This fantastic page-turner will give you an insight into the world of intrigues and secrets in the court of Louis XIV, perfect in preparation for what promises to be the most talked-about TV series of 2016! 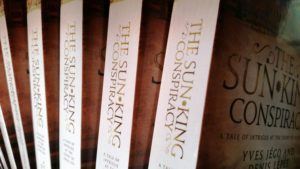 The Sun King Conspiracy is set in 1661 as Cardinal Mazarin lies dying. As a fierce power struggle develops to succeed him, a religious brotherhood, guardian of a centuries old secret, also sees its chance to influence events. But events take an unexpected turn when a set of documents from Mazarin’s palace fall into the wrong hands. Their contents have the power to change the course of history for France, and for the Sun King.

Louis XIV, France’s Sun King, had the longest reign in European history (1643-1715). During this time he brought absolute monarchy to its height, established a glittering court at Versailles, and fought most of the other European countries in four wars. A novel with such a character at its core should not be resisted.