Tracy Farr speaks about the inspiration behind the book and its unforgettable main character, Lena Gaunt: musican, octogenarian, junkie.

What sparked your interest in the theremin, and in the character of Lena Gaunt? What kind of research did you have to do?

I’d started writing notes, circling around a character I wanted to write about. I knew she was a musician, but I couldn’t pin down what her instrument was, and I needed to do that before I could write much more about her. 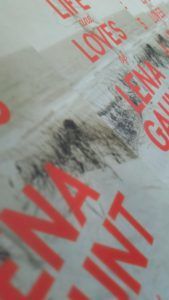 When I watched the documentary Theremin: An Electronic Odyssey, I knew I’d found Lena’s instrument – an instrument you play without touching was perfect. The film – a history of this bizarre musical instrumet and its inventor, Leon Theremin – was where I first encountered Clara Rockmore, the first virtuoso player of the theremin. But I knew I didn’t want to base my character, Lena, strictly on Clara, so I more or less stopped my research then and there. Film and still images of Clara – from a young girl to an old woman – in the documentary gave me some really strong visual cues for my character, Lena. I started with a lot of notes based on my recollection of the film, then as I developed the character, I aimed to distance myself and Lena from the film and from real life events. Clara Rockmore was a starting point for Lena, rather than a model.

What gave you the idea to make Lena a user? In what ways does her drug use help you explore the novel’s themes?

Aetherwave – an alternative name for the theremin – prompted a clear connection in my mind between (a)ether and anaesthesia. Once I’d established that Lena played the Aetherwave machine, her drug use (and the particulars of it – smoking opiates) fell into place. I saw Lena self-medicating for recreation, but also for relief from emotional pain. I liked the idea of opium-smoking as an old-fashioned, almost genteel, turn-of-the-century pastime. It was a neat fit with notes I had from my great-grandfather’s observations of life in Malacca in the early twentieth century, and with the opium dens that would have existed in Sydney when Lena found herself there.

I also liked the idea that as a writer I had to work hard to make it believable for the reader that Lena could reach the grand age of eighty, despite years of drug use. I figured that a mostly controlled habit, and the comfortable financial reserves to ensure her supply, could make that possible. On the other hand, I hope there’s at least a hint in the novel that she wasn’t as in control of her habit as she – in her telling of her own story – indicates

Aether/wave; smoke/water: I played with those motifs in the novel. Both can be healing, cleansing (think of herbs

burnt to cleanse, to cure, to drive away spirits); both can be dangerous. Balance and caution are required – don’t swim too deep; don’t fall in the well; just a little, just enough.

Lena is unreservedly enthusiastic about the increasing influence – some might say infringement – of the technological on the artistic. What are your own feelings on the subject?

I don’t share Lena’s enthusiasm unreservedly; I sit on the fence. I can see beauty in (and from) technology, but at the same time I’m a great fan of the old-school, the hand-made, in all its forms. I hoped, as I was writing, that readers could believe in her decision to put the (warm, human) cello aside in favour of the (manufactured, cold, machine) theremin, but I knew it was a big ask. So, I was careful to nurture and build Lena’s enthusiasm for the modern, to make it make sense in the context of her life and experiences, to have it be something she learns originally from Uncle Valentine. That time between the wars was a time for celebration of technology, favouring new over old, manufactured over hand-made. In our time, now, the effect of e-books (new publishing models) on treebooks (traditional publishing models) is clearly an example of the influence – some might say infringement, others liberation – of the technological on the artistic.

The sea is almost a character in the novel, functioning as an essential wellspring for Lena. Do you too find the sea to be artistically magnetic or sustaining?

I have a complicated relationship with the sea, myself. I was fearful of the ocean as a child – a terrible

swimmer – and remain, as an adult, respectful and slightly nervous of it. So, unlike Lena, I find the sea magnetic and sustaining from a distance, or as a notion, rather than needing to be immersed in it. It features in a lot of my writing, almost to the point of obsession; perhaps I am writing the ocean to tame it, or simply to understand it.

I had firmly in mind as I wrote the novel the twin motifs of air and water that that etherwave (‘aetherwave’ in the novel), one of the names for the theremin, suggested. Wave – in terms of aetherwave – obviously refers to sound waves, but I also wanted to play around with ocean waves. I wanted sound waves to be present in the ocean waves, as they are in the opening of the novel, when Lena is swimming, and observing sound, and practising her theremin piece underwater. Water flows through the novel, nearly (but not quite) causing harm to Lena as a young child in Singapore, being blamed for the ‘weak heart’ that sees her sent away from her parents; but ultimately, water becomes a healing medium for her; a ‘wellspring’ is a lovely way to describe it. On a larger scale, the sea both separates and links the different geographical chapters of Lena’s life, as she travels by ship between them.

Both Lena’s upbringing and the contours of her life are characterised in many ways by itinerancy. What interested you in exploring a character with a different, more muted sense of national identity, particularly in the period covered by the novel?

In this, Lena is a reflection of me. I grew up near where Lena lives, in Cottesloe, but I left Australia in 1991 – the year that the here-and-now of the novel is set. I’ve lived away from Australia for more than twenty years now, in Canada and New Zealand, and have lived more of my adult life in New Zealand than in Australia. You could say I have a disrupted sense of national identity. Although I love New Zealand, I’m not quite, and perhaps never will be, a New Zealander; but my son is – he was born here, and that grounds me in the place. New Zealand’s home for me, it’s where I live; but Australia’s home, at some much deeper level. There’s a Māori concept, tūrangawaewae, which most simply means ‘place to stand’, or ‘place you’re connected to’. When I smell the air as I walk out of the Perth airport terminal, when I see the sky that goes on forever, when I see bore-water stains on the footpaths, and Rottnest Island floating above the ocean on a strip of heat haze, I know I’m back in the place I’m connected to. As I wrote this novel, I felt incredibly drawn to write about home, and the fact that I was staying in Perth (as writer-in-residence at Katharine Susannah Pritchard Writers’ Centre) when I started the novel in earnest only reinforced that.

In some ways, the novel seems situated at the crossroads of music, prose, and film. Do you see each of these genres as more discrete, or blurred? What about this sort of cross-genre approach did you find stimulating?

I love that liminal, interstitial place. Forms – genres – have their strengths, but I love the idea that they meet and merge and blend. I’ve always been interested in all of the forms that are present in the novel – music, words, film, visual arts – and they’ve always been part of my life in one way or another. Years ago, I used to draw my stories as often as I’d write them in words; nowadays, I just write. When I write, I think in terms of scenes, like the scenes in a play or film, and sometimes I write them using that terminology. And I’m a visual thinker, so I see in my mind scenes and poses (and artefacts, like Trix’s paintings and posters in the novel) as I’m writing. I suppose I’m saying that, for the most part, I don’t see the genres or forms as discrete. And above all, I’m interested in how all these forms tell stories; how they’re all about crafting a story and re-presenting it to an audience; and how, very often, things (stories, people, lives) connect and interconnect.

Tracy Farr is an Australian-born, New Zealand-based author and former research scientist. Her debut novel, The Life and Loves of Lena Gaunt, was longlisted for the 2014 Miles Franklin Literary Award, and shortlisted for the 2014 Western Australian Premier’s Book Awards and the 2014 Barbara Jefferis Award.

Buy ‘The Life and Loves of Lena Gaunt’

France in the World: A New Global History

A fresh, provocative history that renews our understanding of France in the world through a comprehensive collection of short essays.