News > What Did They Mean, A ‘Moral Panic’? An Introduction to This Mortal Boy 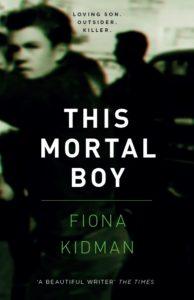 Fiona Kidman’s latest novel, This Mortal Boy (Out August 2019), is the historical recreation of events in New Zealand in 1955. It tells the story of Belfast boy Albert ‘Paddy’ Black, the last man but one that the country sent to the gallows. The book cleverly evokes a period when the Government was obsessed by what became known as ‘moral panic’.

The death penalty was restored in New Zealand in 1950 and remained in force until 1957, when it was made inoperative. Two years too late for Paddy Black. In that short time there were eight executions and 18 murders. Four of the executions took place in the same Auckland prison in 1955 alone. The murder that Paddy Black committed was the second that year on Auckland’s Queen Street, the main retail street that links the harbour front to the hills above. All the major shops are still there today, along with theatres, banks and the old town hall.

All across the country there was a sense that young people, often teenagers, were out of control and had lost all moral standards. The extent of the concern can be seen in the Government’s response. In November 1954 the Mazengarb Report into juvenile delinquency was circulated to 300,000 families around the country. The population of the whole country was only 2.1 million, but was rising fast with the post-war baby boom and an influx of 125,000 migrants, mostly from Britain. In fact, Britain was still referred to as the ‘motherland’ and over half New Zealand’s exports went there. Kiwis were still using pounds shillings and pence.

Oswald Mazengarb was a lawyer asked to chair a Special Committee on Moral Delinquency in Children and Adolescents. The perceived promiscuity of the nation’s youth was blamed on working mothers being away from home, the availability of contraception and young women enticing men to have sex. I confess when I read that I went to check who was on the committee, suspecting they were all men. In fact, of the six members, two were women. Blame was spread between poor parental supervision, loss of Christian values, excessive wages for teens, and the influence of films, comics and American literature.

Among the twenty recommendations of the Mazengarb Report were a tightening of censorship laws to take into account “undue emphasis on sex, crime or horror.” What today we would call a graphic novel, the report saw as designed for “low mentality adults”.

One curiosity in This Mortal Boy was that the murder victim, Alan Jacques, was much better known by the name Johnny McBride. He took the name from the hero of Mickey Spillane’s book The Long Wait. Curious about the sort of man Jacques would choose to idolize, I pulled the book off my own shelves. My copy was sold by a New Zealand bookseller in 1953. It could be one of the very copies that the ‘delinquent youth’ of the day were reading.  The fictional Johnny McBride was a criminal, a bank robber, and safe cracker, not afraid to hit a cop or shoot people when he needed to. He was a drinker, a womanizer and had most of the vices that the Mazengarb report talks about. By modern standards, it was all pretty tame, but at the time it is interesting to see what the establishment wanted to censor.

You can download a copy of the Mazengarb Report from Project Gutenberg and if you are curious about what the real characters in Fiona Kidman’s novel looked like, there is an article in the New Zealand Herald that shows pictures of Paddy Black and Alan Jacques. At the time the murder was called ‘the jukebox killing’ which Kidman has chosen to leave out of her story. Perhaps the nickname came about to differentiate it from the ‘milk bar slaying’ which happened on the same street, four months before.

This Mortal Boy is excellent history mixed with fiction. It brings characters wonderfully to life and gives them a back-story. For me, it supports the argument against capital punishment. Without the death penalty there is every chance that Paddy Black might still be alive today and we wouldn’t have to worry that his sentence should have been manslaughter.

Marcus Hobson is a writer and book reviewer who has lived in New Zealand for fifteen years. He studied Ancient History in London, but now is fascinated by the historical misrepresentation of colonialism.  He reviews for NZBooklovers (www.nzbookovers.co.nz) and ARTbop (www.artbop.co.nz), and lives in the beautiful Bay of Plenty on New Zealand’s East coast, overlooking the Pacific.