News & Events > ‘They’re all inside the house, now, and have been since the rain.’ – A Q&A With Tracy Farr

‘They’re all inside the house, now, and have been since the rain.’ – A Q&A With Tracy Farr

The Hope Fault is a uniquely crafted novel exploring family and beyond: the extended family, steps and exes and those who play a key role in our lives who are not necessarily blood related. This extraordinary novel portraits what the modern family is all about with its secrets and joys, everything under one roof while the rain falls outside. 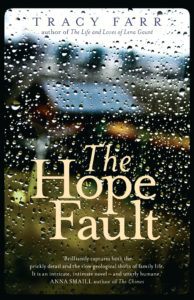 Describe The Hope Fault in one sentence

The Hope Fault celebrates the everyday complexities of family, wobbles on the fault lines of anxiety that underlie our lives, and maps the making and unmaking of what (and where and who) we call home.

That’s a big question, with so many possible answers! To start with, I simply set myself a challenge to write something different. My first novel, The Life and Loves of Lena Gaunt, is about a singular, insular woman, and spans most of the twentieth century and travels the world. I was determined that The Hope Fault would be different: told from the points of view of a close cast of characters of different ages, within a tight timeframe (a long weekend) and restricted setting (the family holiday house). And where the mood of my first novel is mournful, elegiac, I had in mind that this book’s mood would be celebratory. So that was my starting point – my initial why, I guess you could call it.

Where did the idea for The Hope Fault came from?

Once I’d decided on my cast of characters, I went in search of their stories, with the intention of writing about celebration and family (and textiles; there was from the beginning a textile motif that I was keen to include, though in the course of writing that shifted from dyeing to stitching). I started putting the characters into scenes, seeing how they walked and talked in this or that setting, and their voices and relationships and storylines started to emerge from that process.

I was also influenced by techniques of film and theatre and, in particular, the Jonathan Demme film Rachel Getting Married was a great early inspiration. I wanted my novel to have that same sense of people coming together for celebration, talking over one another, music playing in the background and also at the heart of key scenes, and of the story being about something (some unstated thing) other than the celebration. As I wrote, I saw the rooms of the house as film sets, or a stage, with my characters entering and exiting, scenes framed by doors and walls and windows.

My original concept for the novel was knocked sideways by two things: my chance discovery of a geological report, titled ‘The Hope Fault’, and its strange resonance with the language and concerns of my novel-in-progress; and the experience of writing a novel in New Zealand in the years after the devastating earthquakes (in 2010 and 2011) in Christchurch. I had to find a way to integrate all these different elements, make some sense of them; the novel changed dramatically as a result.

‘They’re all inside the house, now, and have been since the rain.’

This line, or variations of it, recurs in the novel. It was a line that came to me early in the writing of the book, and it stayed with me as a kind of mantra, even as the story changed through the writing process. The rain does a lot of work in this novel: it keeps the family contained, cocoons them in the house, but it also creates a particular feel, adds an imagined soundscape. It takes the edge off the celebratory mood, in a way that feels just right for this novel. There’s something about the rhythm and shape of the sentence that works a kind of magic for me.

As I wrote it, the idea that I held uppermost in my mind was ‘celebration’. I described it as ‘a novel about a bunch of people’, their various connections and celebrations; it was about family, and home, and the different things those might encompass. It wasn’t until I’d finished the novel, and started talking about it and looking back at it with some distance, that I realised that it’s also very much about anxiety, and what I’ve come to call the unsettling certainty of uncertainty; the idea that the earth might (or might not!) shift, literally or metaphorically, at any moment, but we can’t know where or when, or what the consequences might be.

Who is your hero and/or heroine of fiction?

Because my memory is terrible, I have to say that it’s most likely to be a character from whatever I’m reading at the moment! So right now, my fictional darlings would have to be Olive May Lovelock, the fierce, brave and fabulous 12-year-old at the heart of Jenny Ackland’s novel Little Gods, who is curious about everything (including but not limited to ‘murders, ghosts, whether it was possible to dig a hole to the centre of the earth. Also: aliens, snakes, various types of poisons, poison in darts, poison in fangs, scorpions and their poison, mummies in Egypt, zombies and cannibals.’); and Madge, the art student/waitress/cartoonist in Mimi Pond’s graphic novels Over Easy and The Customer is Always Wrong, who both is and isn’t the author (Mimi has said ‘Madge is much braver than I ever was’). I suppose I have a type of character I’m attracted to in fiction: women and girls who are intelligent, self-motivated, prickly, fierce, flawed, and at least a little bit weird.

I often say that proofreading is my super power! But among the more traditional super powers, I’d probably opt for invisibility. Then I could just sit quietly, unobserved, and spend all my time reading. Invisibility would also let me stickybeak, brazenly listening to people’s conversations whenever I wished (and I’d jot down those conversations, if I’m allowed an invisible notebook and pen!).

I’m reading Melbourne writer Jenny Ackland’s new novel Little Gods. Jenny’s first novel, The Secret Son, was a magnificent mash-up of two Australian icons, Ned Kelly and Gallipoli, with a beautiful closing scene that I still dream about. Little Gods lives closer to home, centred on the secrets and complicated lives of a family (and their wider community) in rural Australia in the early 1980s. It’s funny, sad, intelligent, and filled with a sense of wonder (rather like its unforgettable central character, Olive Lovelock).

And I’ve just finished reading two brilliant graphic novels, Over Easy and The Customer is Always Wrong, by Mimi Pond. Together, the two books are a semi-fictionalised memoir of a young art student who, in 1978, goes to work in a proto-hipster café in Oakland California. Adventures ensue. Like all the best art, these books are a dynamic mix of light and dark: risk, addiction, trauma, grief and loss are balanced and relieved by joy, celebration, community and music.

I used to re-read my way through Ian Rankin’s Rebus novels every few years, and find that strangely (disturbingly!) soothing. From the mid-90s through the 2000s I would re-read Carol Shields’ 1992 novel The Republic of Love pretty much every year; there was something about it that drew me back again and again, and it continued to have the power to move me each time I read it. More recently, I’ve read Deborah Levy’s Booker-shortlisted novel Swimming Home half a dozen times, trying to work out how she does what she does (and why I love it so much). It’s probably no coincidence that my novel, like Swimming Home, centres on a multigenerational bunch of people – family, friends and others – away at a house in the country. I’ve only this moment made the connection that a key moment in Swimming Home sees one character write the words ‘It’s Raining’ on another character’s hand, so perhaps it’s influenced The Hope Fault even more than I realised. 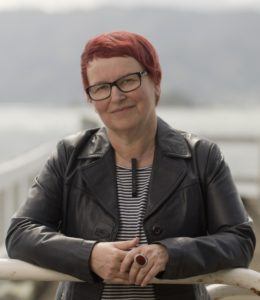 What is next for Tracy Farr?

I’m working on my third novel. It’s still in its very early stages – I’m currently flicking between writing a first draft and doing more research. The working title is Wonderland. It’s the story of three sisters, identical triplets, born in an amusement park in the early twentieth century. I think all I’m ready to reveal at this stage is that it’s about describing the world and making it into sense, and living a life filled with wonder. I’m enjoying writing about the past; it’s liberating to write about people who haven’t all got their heads down looking at small screens in their hands.

The Hope Fault is published July 2018 by Aardvark Bureau, price £8.99 in paperback original and eBook.