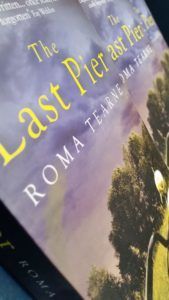 The Last Pier is the sixth novel by Sri-Lankan born, Costa-shortlisted author and artist Roma Tearne, and the very first book to be published by our Aardvark Bureau imprint.

The novel, which takes place on the Suffolk coast at the outbreak of World War Two, draws inspiration from photographs of a family dating from the 1940s the author found in a second-hand shop and elsewhere, and the tragic – and largely forgotten – story of the Arandora Star, a British ship carrying prisoners of war and (mainly Italian and German) internees that was torpedoed and sunk with the loss of several hundred lives 75 years ago. The Independent newspaper called The Last Pier “brilliant … dazzling” and said “by the final chapters, tension grips like a vice” in its review earlier this year.

Here Roma recalls a series of encounters in Italy which encouraged her to write the story of the Arandora Star.

The inspiration for The Last Pier came from a number of sources, the chief one being a book, Dall’oblio all memoria (From Oblivion to Memory), which I found in the town of Pontremoli in northern Tuscany, a place famed for its book fairs since medieval times. It was an account of an incident that had taken place during World War Two. Having read the astonishing story, I hunted out its author, Maria Serena Balestracci, a woman passionate to keep alive what happened. Delighted that I had approached her, she introduced me to many people, from the Mayor of Liverpool to relatives of the victims of this wartime mistake. For various reasons the facts of what took place are almost unknown outside certain parts of Italy and indeed many of the younger generations in the surrounding villages are ignorant of them, too. Only a small plaque in the town hall of Pontremoli bearing a list of names indicates how many families were touched by the tragedy.

On my last day in the area I found the little English-speaking village of Bratto, where so many of the inhabitants are British-born Italians. There I met a man who I shall simply call X. He told me the story again, but from the point of view of a small, bewildered boy growing up in wartime England. We sat under the shade of a fig tree all afternoon, talking, while his friend, our hostess, brought out a wonderful array of torte and English tea for me, her visitor. From the depths of a wooded area, close by, a nightingale sang repeatedly. Time stood still as we were transported back to the 1940s, when the beautiful valley of the Magra was occupied by Germans.

Later, when I said my goodbyes I noticed X was crying silently. He asked me if by any chance my novel would appear before he died. I told him I did not know but sincerely hoped it would and at that he nodded, satisfied. He was in his eighties, blind, and in poor health, but the events of that time were still very clear in his mind.

‘If there is a way to really kill someone, that is to deprive them of memory…if someone is forgotten, this is the greatest calamity that can happen to them.’