The Hurlyburly’s Husband: the true story 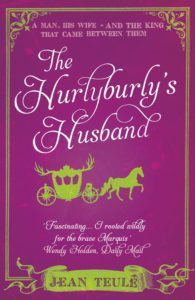 Françoise-Athénaïs de Rochechouart de Mortemart, Marquise de Montespan, was a witty and beautiful style icon with a lust for life…

… This is their true story.

‘Versailles is a dreadful place … there is not a single person whose head is not turned by it. The court changes even the best of souls.’

He devoted the rest of his life to trying to win back his wife and wreaking his personal revenge on the king. Most famously on the day that he arrived at the King’s palace dressed in black, sitting in a carriage painted in black, with massive deer antlers attached to each corner, signifying cuckold’s horns. When the King demanded an explanation he said he was in mourning for his love.

Montespan was imprisoned and exiled to Spain and his chateau in south-west France and died without seeing his wife again.

In his novel The Hurlyburly’s Husband, Jean Teulé has turned a ridiculed figure from history into a sympathetic man who loves his wife, rejects the cynicism and immorality of the Court and believes he has the right to stand up to the King.

It’s a tale of money: had Montespan been rich enough, Madame de Montespan would never have become a lady-in-waiting and caught the King’s eye; it’s a tale of sex: the voluptuous Madame, irresistible to her husband and all men, including the King; it’s a tale of power: the absolute power of the monarch which crushes everything in its way.

A romp, at other times very poignant, it’s an engrossing story that gives a dazzlingly vivid picture of life in the time of Louis XIV.

Read an extract from ‘The Hurlyburly’s Husband’ here

See all books by Jean Teulé