The French Presidential Race … and the Novel that Predicted it

After Brexit and Trump, France looks set for a political earthquake of its own when the country goes to the polls next month. With the Socialist Party suffering from rock bottom approval ratings for incumbent President François Hollande and the Republicans in disarray over the ‘Penelopegate’ scandal around candidate François Fillon’s payments to his wife and children, pollsters are predicting that May’s second round run-off will be fought out between the far-right Front National’s Marine Le Pen and centrist Emmanuel Macron, a former Socialist minister who set up his own movement, En Marche!, last year.

For neither of France’s two major parties to make it past the first round would be extraordinary, but one man saw it coming. Not a political analyst nor a fortune teller, but bestselling novelist Antoine Laurain. 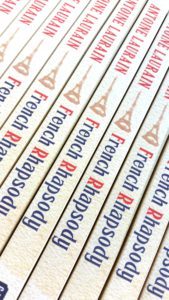 Laurain’s last novel, French Rhapsody, was written in 2015 and published in January 2016, with the English translation released last September. It tells the story of a middle-aged doctor who begins tracking down his former bandmates after receiving a letter back from a record company … 33 years late. It’s a book about music, ageing, nostalgia, lost dreams, but it also, in its own light-hearted way, paints a picture of the political and cultural landscape in France today. One of the former band members is a pompous installation artist, another runs a country hotel. And then there’s Vaugan, the bassist turned far-right politician (slogan: ‘To the Right of the Right’), and JBM, the band’s producer who, after a successful career as an internet entrepreneur, is now an outsider in the race for President. The scenes of the PR campaign behind JBM’s presidential bid, with the candidate posing as a French everyman over a bubbling pot-au-feu, are among the comic highlights of the book.

The prospect of a businessman president, popular precisely because he has no political experience, foreshadows events in America last autumn even more than the forthcoming contest in France – Emmanuel Macron may have chosen to go it alone, spearheading a populist movement that rejects the traditional division of Left and Right, but his background is firmly within the political establishment. Indeed, Laurain conceived French Rhapsody as ‘a global novel about the state of France today’ and claimed in a piece for The Guardian last year that ‘my country is probably not so far from your own … Politicians, both on the left and the right, have never been more unpopular, while extremist and nationalist sentiment has never felt more pronounced’. The piece ends: ‘I hope you enjoy French Rhapsody. One day, what I write will happen.’

Antoine Laurain in ‘The Guardian’