News & Events > Sofie Laguna goes behind the scenes of ‘The Choke’

Sofie Laguna goes behind the scenes of ‘The Choke’

We hope you enjoy reading this author questionnaire where we asked Sofie Laguna to give us an insight to this outstanding novel that promises to be one of your most shocking but memorable reads. The Choke was published in Australia in 2017 to great critical acclaim, winning the Australian 2018 Indie Award for Best Novel and being shortlisted and long-listed for numerous awards including the prestigious Dublin International Literary Award.

This quick, cruel, coming-of-age tale in the vein of recent remarkable literature on dangerous girlhoods and disjointed families will be available in the UK in Spring 2019.

Describe your book in one sentence.

The Choke is a story about a young girl who must navigate her way through a brutal and violent world, with nothing to guide her but imagination and courage.

Why did you write The Choke? 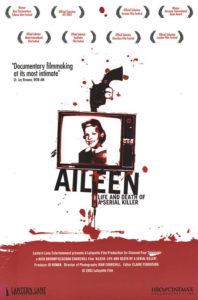 Poster for the documentary ‘Aileen: Life and Death of a Serial Killer’

I wrote the bulk of The Choke in 2016, but I first had the idea for the story seven years earlier. My boyfriend was in Europe without me at the time, refusing to come home, so I was feeling abandoned and alone and terrible when I thought What better time to watch a documentary about a female serial killer? It was Nick Broomfield’s film about Aileen Wuornos, and it devastated me. Aileen’s childhood was impossible. I was outraged on her behalf; it didn’t seem there was any chance of hope for her. I couldn’t bear the feelings the film gave me. I wanted to write a book that might give that child a voice, and my own feelings a place.

Dyslexia plays a key role in Justine’s character, could you please share more about this angle?

In The Choke I am exploring notions of masculinity, as described through the eyes of a young girl, Justine Lee. Justine is easy to dismiss; she fails to charm or beguile. She is dyslexic; she can’t read. She can only guess. Words are power and Justine can’t find them. By using a character like Justine to tell the story – vulnerable, female and shy – I can hold my culture up to the light, make it accountable, and express my fury at its brutality. I can do this because of Justine’s vulnerability, her innocence and her powerlessness. A character like this highlights its opposite. Justine is exploited, neglected – and yet she will find her way, her voice, and her dream. Ultimately my new novel is about courage and determination.

The men in Justine’s life celebrate guns and what they symbolize about being a man. The hero of Justine’s household is John Wayne; but there are two sides to this story of masculinity; one side is ease and control. The other is brutal possession, violence and narcissism. The Choke is also a story about rape. 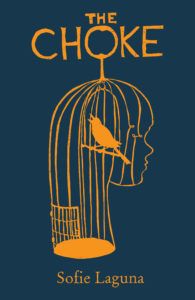 UK cover of The Choke by Sofie Laguna

Know yourself. Be courageous, and face the truth, for the truth will set you free. Fight for yourself. Hold on and fight and insist on the love you deserve.

How do you create/develop your characters?

Intuitively, sentence by sentence, word by word, metaphor by metaphor. I learn them as I go, there is no formula, no single method, I feel them in my heart. Voices speak to me in quite a natural way, then I become invested, and know my characters more and more deeply.

When I was choosing the setting for my novel, The Choke, I was interested in a rural area somewhere on the Murray River. I knew nature was going to be important to my central character, ten-year-old Justine Lee. I learned that Barmah, (on which Nullabri is based), just north of the border with NSW, and only 230 km’s from Melbourne, was near the biggest red gum forest in the world. I was intrigued as I looked at images of the red gums growing in the floodplains of the Barmah National Forest. I read about the Barmah Choke – a place in the Murray where the banks come closer, flooding at certain points in the year, contributing to the wetland’s environment. I liked those words – Barmah and Choke and the way they sat together – the first so round, lifting at the final vowel, and the second so tight, hemmed in by biting consonants. The words seemed to contradict each other. 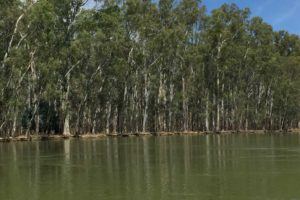 The first time I visited Barmah I chose to stay in a hotel in Echuca, about 30 km’s away. Echuca is an Aboriginal word for ‘Meeting of the Waters’; it sits at the junction between the Goulburn, Campaspe and Murray rivers and was once a thriving port town. When I arrived in Echuca I parked the car near the Echuca – Moama Bridge and walked across, stopping halfway to look at the Murray flowing below, wide and brown. Moama was in NSW and Echuca was in Victoria – the river was the boundary. In my novel The Choke my protagonist, Justine, is intrigued by this flowing boundary, by the persistent nature of water, and the trees that continue to grow in it.

It was beautiful there by the Murray, but I felt ghosts too. I didn’t know if they belonged to the lives of my characters, or to the mystery of the river itself. I heard unsettling whispers of something I couldn’t name. The twisted bulging gums were silent but seemed to be speaking.

Anna Burns, Marilyn Robinson, Elizabeth Strout, Helen Garner, Sebastian Barry, Colm Toibin, Kazuo Iziguro, Hanya Yanagihara, JD Salinger, Gabriel Tennant. You know, it is really books that I admire, stand- alone books, as if they came from somewhere else, and not an ordinary person. I love so many different books, at different times, and rarely read the same book twice.

Looking after young kids! Before kids I was at the movies or walking the dog in the park. I swim a lot of laps, I run a lot, I read.

The super power you wish you had.

Name the book you’ve re-read the most.

Read an extract of The Choke here