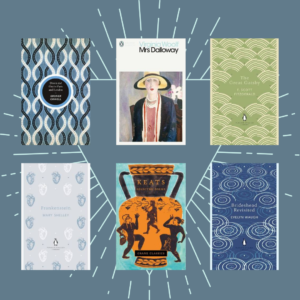 For many of us the start of a new year is the time we promise to read more, and to read better. Here’s a list of six classics to add to your bookshelves this year, and finally tick off that reading bucket list.

Written after a nightmare when its author was only eighteen, Frankenstein gave birth to the modern science fiction novel. A twisted, upside-down creation myth, Mary Shelley’s chilling Gothic tale lays bare the dark side of science, and the horror within us all. A perfect novel to read over the chilling winter period.

Clarissa Dalloway, elegant and vivacious, is preparing for a party and remembering those she once loved. In another part of London, Septimus Warren Smith is suffering from shell-shock and on the brink of madness. Smith’s day interweaves with that of Clarissa and her friends, their lives converging as the party reaches its glittering climax. Virginia Woolf’s masterly novel, in which she perfected the interior monologue, brings past, present and future together on one momentous day in June 1923.

Down and Out in Paris and London by George Orwell

When he was a struggling writer in his twenties, George Orwell lived as a down-and-out among the poorest members of society. With sensitivity and compassion, Orwell exposed the hardships of poverty and gave readers an unprecedented look at life lived on the fringes of society. His vivid account is an enduring call to support the world’s most vulnerable people and exemplifies his belief that poverty is perhaps the world’s greatest evil.

Jay Gatsby is the man who has everything. But one thing will always be out of his reach … Everybody who is anybody is seen at his glittering parties. Day and night his Long Island mansion buzzes with bright young things drinking, dancing and debating his mysterious character. For Gatsby – young, handsome, fabulously rich – always seems alone in the crowd, watching and waiting, though no one knows what for. Beneath the shimmering surface of his life he is hiding a secret.

After a life which was often a struggle and a death which was certainly premature, time has been kind to Keats and granted him the reputation he richly deserves. Today he is rightly seen as one of the cornerstones of the Romantic school. His poetry is much loved and much remembered. This selection offers an introduction to his great legacy and to the Romantic poets generally.

The most nostalgic and reflective of Evelyn Waugh’s novels, Brideshead Revisited looks back to the golden age before the Second World War. It tells the story of Charles Ryder’s infatuation with the Marchmains and the rapidly disappearing world of privilege they inhabit.