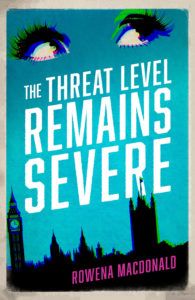 A black comedy set in the House of Commons about a love triangle between three back office workers.

I wanted to capture the peculiar atmosphere of the House of Commons. It’s a self-contained, somewhat eccentric world, that can feel like an island in the middle of London, when you are working there, and I liked the idea of trying to write a novel entirely set inside the Palace of Westminster but, logistically, for plot reasons, I had to include some scenes beyond it.

Places are probably my biggest inspiration. My debut collection, Smoked Meat, was set in Montreal; as with Threat Level I wanted to capture the atmosphere of the place in words.

I’ve written seriously since I was about twenty five. But as a kid I used to write stories. Although I was more into drawing back then; I used to draw endless cartoon strips of ballerinas and girls with long hair and narrate their stories to myself as I drew.

So many. Hard to pick a few. Katherine Mansfield, Jean Rhys, James Joyce and John McGahern are all important to me. I love Evelyn Waugh. I admire the early novels of Haruki Murakami; I wouldn’t say I’m influenced by him exactly but I feel he has a similar way of looking at the world, a similar interest in the strangeness and absurdity of everyday life. I love the early works of Martin Amis; his style is scintillating and he’s so funny. Also Philip Hensher, whose novel Kitchen Venom, which is set in the House, was a big influence on Threat Level; I read it when I first started working in the House sixteen years ago. I also love Alan Hollinghurst; all his novels are brilliant but The Line of Beauty is a masterpiece.

The four best books I’ve read in recent years are Canada by Richard Ford, A Visit from The Goon Squad by Jennifer Egan, Things to Make and Break by May-Lan Tan and Only the Visible Can Vanish by Anna Maconochie. Oh, and On the Black Hill by Bruce Chatwin.

I forgot to mention Nabokov. In terms of sheer style, he’s probably my favourite writer.

Mainly looking after my daughter, Leah, who is two, and working at the House of Commons. I do both of those things more than I write at the moment.

It’s not really a super power but I wish I was an amazing acrobat.

Currently I don’t really have one. Since having my daughter, I’ve not done much actual writing although I’ve got a few projects in the pipeline, stuff I’ve started that I’m itching to finish. And there’s a novel I finished before I had Leah, which my agent is hoping to sell next, and I’ve also got another collection of short stories finished which I am hoping to get published. So, I feel I can rest on my laurels a little and concentrate on enjoying my daughter’s early years. Before Leah I used to write on Fridays, often in the British Library, or in my kitchen, or sitting up in bed. Sometimes I would write at weekends. When I first started out I used to write every morning for about an hour before work, but that habit has long gone, mainly because I no longer live alone. It was a good habit though. I got a lot written.

Just finishing off Apple Tree Yard by Louise Doughty; I really enjoyed the TV series. Made me wish I’d put more sex and at least a few spies in my novel. I missed a trick there. Also, started Edmund Gordon’s biography of Angela Carter, which is excellent. She was as singular and fascinating as her fiction. Plus, I’m reading the Eloise books by Kay Thompson to Leah. I carry on reading them after she’s fallen asleep. They’re very comforting and I love Hilary Knight’s illustrations. I’d like to live in a hotel like Eloise.

It’s probably a tie between The Rachel Papers by Martin Amis, which I find hilarious, and The Adventures of Huckleberry Finn by Mark Twain. I first read it when I was about twelve. I’ve always been interested in people living in odd, provisional ways, in hiding or on the run.