News & Events > Lucy Treloar and the Inspiration Behind ‘Salt Creek’

Lucy Treloar and the Inspiration Behind ‘Salt Creek’ 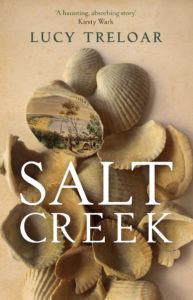 Salt Creek is about Hester Finch (fifteen at the novel’s beginning in 1855) and her idealistic family who move to remote and untried country in rural South Australia in a bid to restore their fortunes, and there discover the limits of love, civilisation and the ideals that they hold so dear.

The Coorong, where Salt Creek is set, has always had an almost mythical quality for my family. Several times a year, when I was a child, my family would make the pilgrimage from Melbourne to the family beach house in South Australia five hundred miles away, each time passing the Coorong’s inland margins – a landscape of rolling saltbush and shimmering sky. My mother would tell almost fantastical stories of one of our ancestors and his large family who moved to these wilds in an attempt to restore the family fortunes.

Those intriguing fragments that had survived from the past were the foundation stones of Salt Creek. But the real catalyst for me was a research trip I went on to this region, kayaking up the lagoon and across to the windswept peninsula overlooking the Southern Ocean to the site of the old family homestead. After that the book demanded to be written. I was desperate to explore that desolate world and terrified that someone else would have the idea first. But part of my motivation was also that I could feel the fragility of the family stories and wanted to record them in some way so they wouldn’t be lost forever.

Places often inspire me. It doesn’t have to be a landscape, though it often is, but it does need to have a rich atmosphere that I respond to strongly and that I want to explore and inhabit with people. Objects can be important too: a small white stone, sea glass and old flints all made their way into Salt Creek from a bowl of these things I kept on my desk while writing. Holding and feeling them brought the world I was creating closer.

As for characters and getting to know them, I need to have a sort of soundtrack of them speaking in my head. For instance, Hester Finch, the narrator of Salt Creek, began with a letter written by a great (x5) aunt who, like Hester, travelled to the Coorong in the 1850s; that voice and Hester as a character developed from there.

I have always gravitated towards writing: secret poetry when I was a child, and journalism and a few children’s books and short stories since then, and I’m always writing in my head, constructing sentences and thinking of ways to describe the things I see, feel and think. Committing to writing something as large as a novel was a major leap for me, and now that I’m starting on a new book I feel stunned all over again at the enormity of the task. What keeps me going back is that getting a sentence right, or lighting upon the exact word to convey a meaning gives me a level of satisfaction – part emotion and part intellect – that I just don’t get anywhere else.

So many writers… The work of great authors is daunting, but inspiring too. I read and reread and try to learn from them: Marilynne Robinson, Hilary Mantel, Cormac McCarthy, Elizabeth Strout, Ali Smith, Herman Melville, Charlotte Bronte, Jane Gardam and, for sheer enjoyment, Georgette Heyer.

I don’t like to overfill my days, or to plan my life too much. The writing always proceeds better if things are very calm around me. I write in the morning, edit for a couple of Southeast Asian translation companies in the afternoon, or work on short non-fiction pieces, and potter around the garden filling birdbaths and idly gardening when I need a break. When I’m really engaged in writing fiction I think about it pretty much all the time. Everything seems to circle back to it. I enjoy that so much. I do love to read and reread. And there’s family and a lovely group of writing friends who I like to spend time with.

Hard to go past flight… Is that a superpower? I often look at hovering birds, at their curious and intent gazes in flight, their heads turning and taking in the world below. I would love to be able to do that. I suppose it’s about inhabiting another way of seeing the world, which is what always interests me in writing.

My days vary a lot. If I’m writing – which is most mornings when I’m on a deadline – I start in bed at around 6.00 a.m., pot of tea at my side, handwriting whatever scene interests me, and go into my writing studio at 9.00 and work on the computer, using the handwritten material as my jumping-off point. I don’t let myself leave until I’ve written at least a thousand words. The afternoon is taken up with my other work, which I do at home in my Internet friendly office. My dogs snooze in their bed to one side and let me know when it’s time for a walk.

I’ve always got a heap of books on my bedside table (twenty-one right now – I just counted), several of which I’ll be reading, each for different reasons. Open at the moment: Barbara Kingsolver’s Prodigal Summer (I’ve read and enjoyed it a couple of times, but this time I’m finding it very polemical), Moby Dick (I’m writing a short piece on why it’s one of my favourite books), Gerald Durrell’s My Family and Other Animals (an old comfort read), non-fiction research reading for my next novel, Elizabeth Strout’s My Name is Lucy Barton (rereading for a writers’ book group I’m part of).

I’m a great re-reader, but I tend to go through rereading phases rather than having a single book that I’ve always reread. I reread my way through Marilynne Robinson’s novels every couple of years and always discover new things in them. Moby Dick is one of my touchstone books, which I often dip into without reading all the way through, and I reread quite a bit of Cormac McCarthy (the Border Trilogy and Blood Meridian especially). Jane Gardam’s The Hollow Land is a very great favourite. It effortlessly floats free of convention and age classifications. When I read Elizabeth Strout’s My Name is Lucy Barton early this year I knew it was a book I’d keep rereading. How did she write something so quiet, so economical, so devastating?