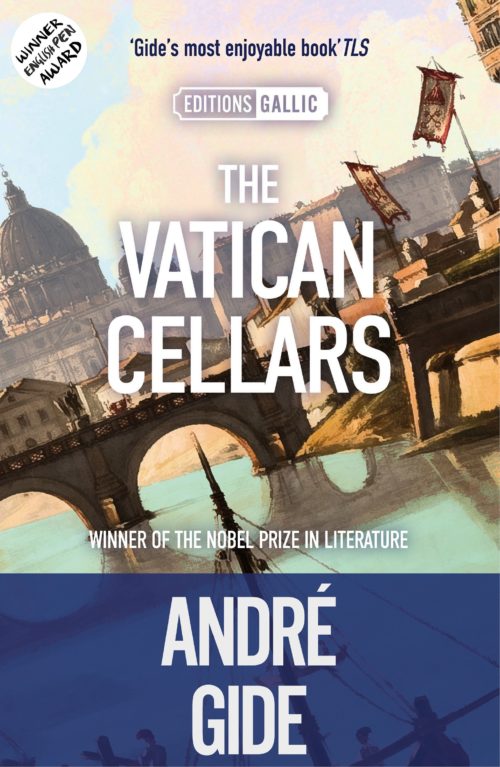 A send-up of conventional morality that features, in the amoral Lafcadio, one of Nobel-winner Gide’s most original creations.

Buy The Vatican Cellars eBook from:

Buy The Vatican Cellars audiobook from:

Could the Pope have been secretly abducted?

When nineteen-year-old Lafcadio Wluiki learns he is to inherit a French aristocrat’s fortune, he heads to Rome, where a plot is afoot: ingenious fraudsters have set about convincing their wealthy victims that the pontiff has been imprisoned by freemasons at Castel Sant’Angelo.

Saving toddlers from burning buildings one minute and committing a shocking, motiveless crime the next, the amoral Lafcadio is one of Nobel-winner André Gide’s most original creations, and a model for later fictional anti-heroes such as Sartre’s Meursault and Highsmith’s Ripley. A send-up of conventional morality, The Vatican Cellars also carries an enduring warning about how easily we are duped by charming rogues.

‘An expertly constructed network of coincidence and error, shot through with a level of dramatic irony not present in the work for which Gide is most renowned’ Irish Times

‘A joy to read. It is beautifully articulated and superbly written … A glorious and satisfying “thriller”‘ New York Times

‘Gide’s subtle, snarky humor had me very entertained, even though many of the characters do completely depraved things. I understand why Gide was such a controversial author in his time’ A Bookish Type

‘The Vatican Cellars is an entertaining, easy read and can be intellectually stimulating if you are interested to analyse it further’ Word by Word

An Introduction to the Vatican Cellars

‘Vatican Cellars’ on ‘The TLS’ Blog

André Gide was a giant of twentieth-century French literature. An innovator of the novelistic form, he undertook a life-long exploration of morality in his work, and was a major influence on the writing of Jean-Paul Sartre and Albert Camus. Gide was awarded the Nobel Prize for Literature in 1947.