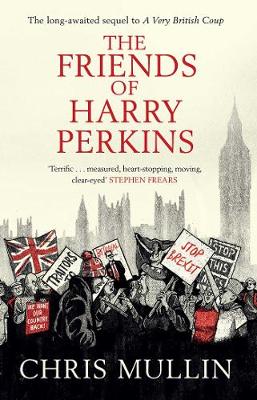 The Friends of Harry Perkins

Buy The Friends of Harry Perkins eBook from:

Buy The Friends of Harry Perkins audiobook from:

The definitive post-Brexit novel, and long-awaited sequel to the bestselling A Very British Coup. ‘Brexit Britain was a gloomy place. True, the Armageddon that some had prophesied had not occurred, but neither had economic miracle promised by the Brexiteers. Instead there had been a long, slow decline into insularity and irrelevance. The value of the pound had fallen steadily against the Euro, the dollar and the Yuan. The much vaunted increase in trade with the Commonwealth had not materialised. The Americans, too, were proving particularly obstreperous. Even now after a nearly decade of negotiations no significant agreements had been reached. At the UN there was talk of relieving the UK of its seat on the Security Council.’ In post-Brexit Britain, the country’s international standing is the lowest it’s ever been, and social tensions have reached boiling point. Fred Thompson – former aide to the left-wing prime minister, Harry Perkins – is determined to put things right. As he climbs the political ranks, though, Thompson learns that principles must be compromised and dangerous bargains struck if he is to attain the only office high enough to truly make a difference. At once a gripping political thriller and a chilling prognostication of where we may be headed, this taut, insightful and engrossing novel is essential reading for our troubled times.