Welcome to Belgravia Books > Browse the shop > Products > Sport > That Will Be England Gone: The Last Summer of Cricket 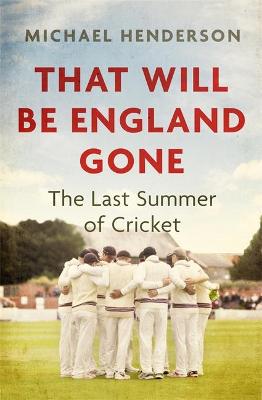 That Will Be England Gone: The Last Summer of Cricket

Buy That Will Be England Gone: The Last Summer of Cricket eBook from:

Buy That Will Be England Gone: The Last Summer of Cricket audiobook from:

Neville Cardus once said there could be no summer in England without cricket.

The 2019 season was supposed to be the greatest summer of cricket ever seen in England. There was a World Cup, followed by five Test matches against Australia in the latest engagement of sport’s oldest rivalry. It was also the last season of county cricket before the introduction in 2020 of a new tournament, The Hundred, designed to attract an audience of younger people who have no interest in the summer game.

In That Will Be England Gone, Michael Henderson revisits much-loved places to see how the game he grew up with has changed since the day in 1965 that he saw the great fast bowler Fred Trueman in his pomp. He watches schoolboys at Repton, club cricketers at Ramsbottom, and professionals on the festival grounds of Chesterfield, Cheltenham and Scarborough. The rolling English road takes him to Leicester for T20, to Lord’s for the most ceremonial Test match, and to Taunton to watch an old cricketer leave the crease for the last time. He is enchanted at Trent Bridge, surprised at the Oval, and troubled at Old Trafford.

‘Cricket,’ Henderson says, ‘has always been part of my other life.’ There are memories of friendships with Ken Dodd, Harold Pinter and Simon Rattle, and the book is coloured throughout by a love of landscape, poetry, paintings and music. As well as reflections on his childhood hero, Farokh Engineer, and other great players, there are digressions on subjects as various as Lancashire comedians, Viennese melancholy and the films of Michael Powell.

Lyrical and elegiac, That Will Be England Gone is a deeply personal tribute to cricket, summer and England.