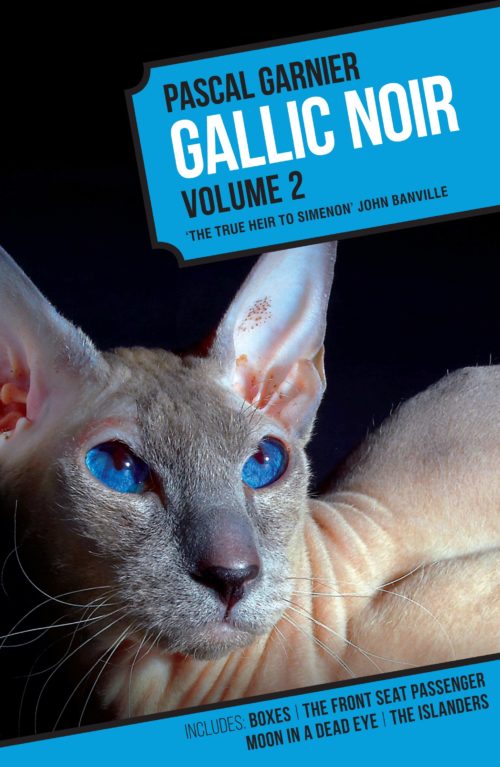 Boxes, which tells the story of Brice, ‘the sole survivor of the natural disaster that at one time or another strikes us all, known as ‘moving house’’

The Front Seat Passenger, in which a widower discovers his wife had a lover and decides to track down his widow

The Islanders, whose protagonist Olivier finds himself thrown back together with a childhood friend with whom he shares a dark secret

Moon in a Dead Eye, in which the paranoia of the residents of a gated retirement village spins out of control.

‘It’s dark, stomach-twisting stuff, and the mysteries surrounding Emma’s whereabouts and Brice’s striking visual similarity to someone in Blanch’s past keep you turning the pages hungrily.’ La Friction

‘ I would recommend Boxes by Pascal Garnier to anyone who enjoys reading a mystery. Garnier adds a plot twist at the very end that will have you grabbing for another one of his books.’ San Diego Book Review

‘Garnier calmly peels back the revealing layers, leaving a raw sort of horror all the more devastating for its believable simplicity.’The Complete Review

‘It is an achievement for an author to write in finely crafted prose but for a translator to convey that in another language is significant too. This story kept me reading without stopping! Not the first time from Gallic Books. It also has an unexpected ending. It is good to leave a book feeling there is more material in it for your mind to conjure with and this does just that!’ D.Olser, NetGalley reviewer

‘…this one will help reinforce his cult status among noir fans.’ Publishers Weekly

‘The story is told in clear concise prose and although there is plenty of dark matter there are also surreal touches, and moments of real humour. This is quality writing; those who enjoy Highsmith and Simenon, in particular, may find it to their taste.’ Crime Review

Reviews for The Front Seat Passenger

Reviews for The Islanders

‘The perfect antidote to saccharine Christmas tales’Curiosity Killed the Bookworm

‘The ultimate anti-feel-good Christmas story … how does Garnier manage to deliver, again and again, in such succinct formats, a devastatingly accurate description of people on the margins of society and on the borderline of alcoholism and madness?’ Finding Time to Write

Reviews for Moon in a Dead Eye