Welcome to Belgravia Books > Browse the shop > Products > Lifestyle & Reference > Motoring > One More Than 10: Singer and the Porsche 911 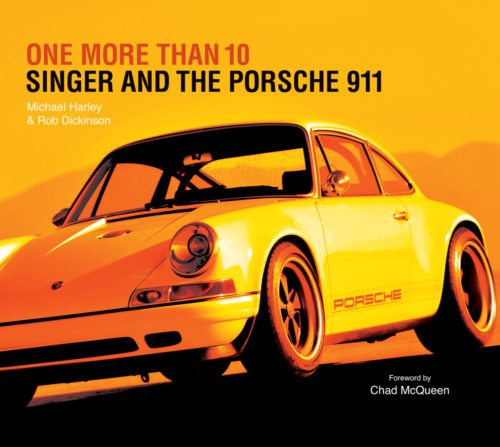 Buy One More Than 10: Singer and the Porsche 911 eBook from:

Buy One More Than 10: Singer and the Porsche 911 audiobook from:

Some call them the best air-cooled Porsches ever, others the best cars in the world. They are the Porsche 911 sports cars that have been restored, reimagined, and reborn by Singer Vehicle Design.
Each commission represents a unique collaboration between the customer and Singer, combining bespoke carbon fiber body panels, the finest in optimized mechanical and electrical components, superlative materials and finishes, and the spirit of the golden age of the iconic air-cooled 911. Every Singer-restored car is an incomparable work of impeccable craftsmanship. One More than 10: Singer and the Porsche 911 brings the reader as close to these beautiful machines as one can get, excepting the lucky few who own one.

Singer Vehicle Design is driven by the singular vision of Rob Dickinson, an ex-car designer and rock musician who came to be one of the world’s foremost distillers of the essence of air-cooled Porsche. Journalist Michael Harley and Dickinson tell the story, while an all-star cast of automotive writers, journalists, and personalities offer their perspectives on the Singer phenomenon. Throughout the book some of the finest photographers in the automotive world, with unparalleled access to Singer’s operations, reveal the sublime beauty of these Porsche 911s as they are restored, and as they play at the track and run the open road. More than that, the book tells the story of how a life-long obsession with the most important sports car on the planet, which began on an autoroute in France in the ’70s, came to find a home on the concours lawns and racetracks of the world’s most prestigious automotive events.