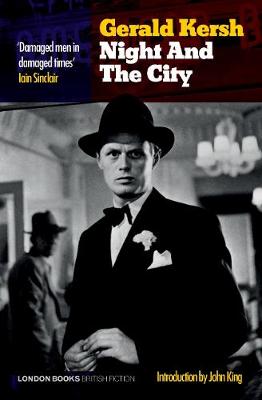 Night And The City

Buy Night And The City eBook from:

Buy Night And The City audiobook from:

Harry Fabian is a cockney wide boy trying to make it big in the Soho underworld of the 1930s. He is a Flash Harry in an expensive suit, a chancer operating in a cosmopolitan corner of the city where villains, spivs, prostitutes and strong-arm men thrive. But his ambition and reckless nature are pushing him towards more and more extreme acts – and a day of reckoning.

‘Night And The City’ is a classic work of social-realist fiction that captures the vibrant yet seedy underbelly of London between the world wars. Its author Gerald Kersh was high-profile, prolific and hugely popular at his peak, but would later drift into hardship and obscurity. His writing is now being rediscovered. A maverick character in his own right, Kersh’s life was as colourful as those of his most flamboyant creations.

As well as a highly respected novel, Night And The City was twice filmed – in 1950 and 1992 – and it is the first of these adaptations that is today regarded as one of the best of the British film-noir genre. Directed by Jules Dassin and starring Richard Widmark and Googie Withers, it was shot in a post-war landscape heavy with menace and charm – just like the book on which it was based.