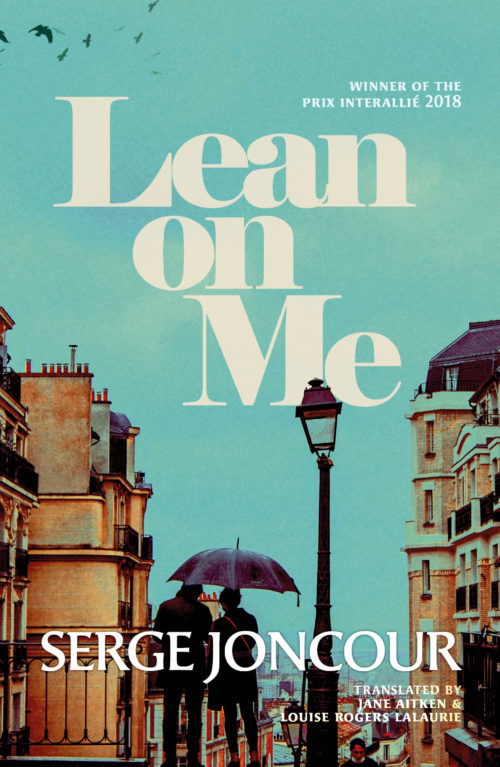 A prize-winning bestseller in France, this is the unlikely love story of two lonely people in present-day Paris

Buy Lean on Me eBook from:

Buy Lean on Me audiobook from:

Winner of the prestigious Prix Interallié

When a flock of crows invades their shared apartment block, farmer-turned-debt collector Ludovic and fashion designer Aurore speak for the first time. With nothing but the birds in common, the two are destined for separate lives, yet are drawn inexplicably together.

Though their story is set in Paris, the tale of Ludovic and Aurore is far from an idyllic romance. With one trapped in an unhappy marriage and the other lost in grief, the city of love has brought each of them only isolation and pain. As Aurore faces losing her business and Ludovic questions the ethics of his job, they begin a passionate affair. Love between such different people seems doomed to failure, but for these two unhappy souls trapped in ruthless worlds, perhaps loving one another is the greatest form of resistance.

From the award winning author of Wild Dog, Lean on Me explores the realities of unlikely love, and how connection and intimacy offer us an escape from all that is harsh and cold in our modern day lives.

‘An unassuming storyline with a peppy heart that is well observed, charming and takes a wry look at life in Paris’ Tripfiction

‘This richly observed and thoughtful novel is part love story, part meditation on the loneliness of urban life and the necessity of connection’ Booklist Magazine

‘Some books have an unexpectedly powerful effect on you. Lean on Me, despite its deceptively calm title, is one of these, [with] lyrical lines that stay with you long after the book is closed’ Elle

‘Joncour describes the dizzying effects of love and the power of attraction without raising the tone, retaining instead the magic behind a sentence that allows you to move seamlessly from laughing to crying’ Télérama

‘A call to openness… an optimistic, comforting story’ Le Devoir

‘A love story that also paints an image of society and is interspersed with humour, tenderness and intelligence. Joncour … is in his element. Clearly, we can lean on him’ L’Express

Louise Rogers Lalaurie is a translator from the French and the author of Matisse: The Books. Her translations have been shortlisted for the CWA Daggers and Best Translated Book Awards.

Jane Aitken is a publisher and translator.