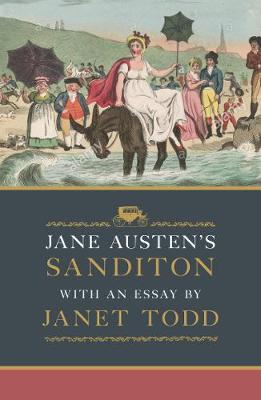 Jane Austen’s Sanditon: With an Essay by Janet Todd

Buy Jane Austen’s Sanditon: With an Essay by Janet Todd eBook from:

Buy Jane Austen’s Sanditon: With an Essay by Janet Todd audiobook from:

‘Sanditon’ is Jane Austen’s last novel, unfinished when she died in 1817. A comedy, it continues the strain of burlesque and caricature she wrote as a teenager and in private throughout her life.

In her ground-breaking essay, Todd contextualizes Austen’s life and work, ‘Sanditon”s connection with ‘Northanger Abbey’ (1819) and ‘Emma’ (1816), Jane Austen’s insecurity of income and home, and the Austen family’s financial speculations. She examines the work’s discussion of the moral and social problems of capitalism, entrepreneurship, and growing tourism, and their effect on traditional values and rural communities. Todd explains the early nineteenth-century culture of self: the exploitation of hypochondria, health fads, seaside resorts, and miracle cures. Arguing that ‘Sanditon’ is an innovative, ebullient study of human beings’ vagaries (rather than using common sense, its characters follow intuition and bodily signs), she shows Austen’s themes to be akin to contemporary concerns about self-obsession and the culture of narcissism, as well as a comic study of the gap between how we think of ourselves and how we appear and sound to others.