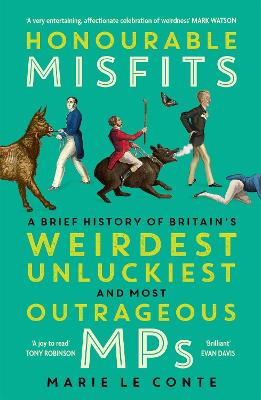 A Brief History of Britain’s Weirdest, Unluckiest and Most Outrageous MPs

Politicians are weird – we can all agree on that. But do you know how much weirder they used to be? If not, Honourable Misfits is the book for you.

Spanning from the past seven hundred years, this is a celebration of the oddest and most eccentric MPs the House of Commons has ever seen. From mad inventors and fearless adventurers to Machiavellian villains and mavericks with more money than sense, it offers sixty-five pen portraits of the unique, the mysterious and the downright deranged.

There is the one who built a complex network of tunnels and underground rooms underneath his estate; the one who liked to go hunting naked; the one who set himself on fire to cure his hiccups, and the one who invented a very small gun with which to kill flies.

Still, they weren’t all useless; there was also the MP who invented weather forecasts, and the one who documented more animal species than nearly everyone else.

They weren’t all good either; between the fascist turned Buddhist monk and the spy who faked his death, there are more than enough villains to go around.

They also weren’t all lucky; included in Honourable Misfits are tributes to MPs with tragic deaths, from falling on a turnip to getting in a car accident the day after getting elected.

This is a book to celebrate human nature in all its odd, compelling complexity.