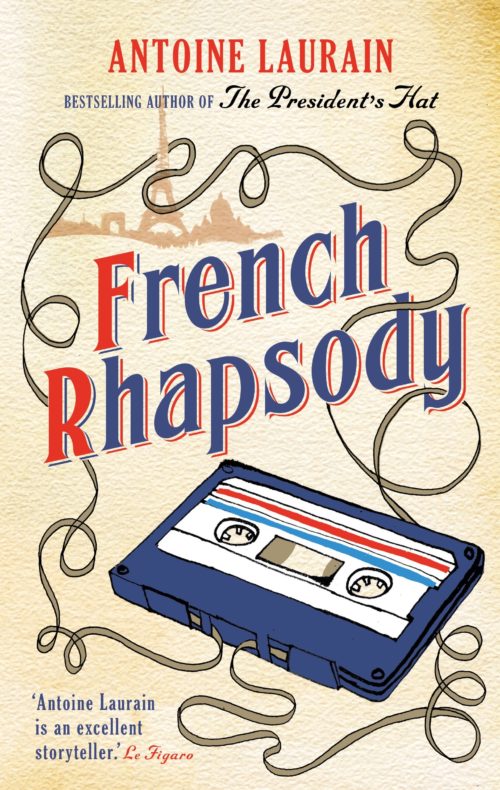 A letter delivered after a 33 year delay sparks a nostalgic journey back to the 1980s and a journey right into the heart of France today.

The arrival of a letter delayed by 33 years sparks off a quest that leads both on a nostalgic journey back to the 1980s and right to the heart of France today.

Middle-aged doctor Alain Massoulier has received a life-changing letter – thirty-three years too late. Lost in the Paris postal system for decades, the letter from Polydor, dated 1983, offers a recording contract to The Holograms, in which Alain played lead guitar. Overcome by nostalgia, Alain is tempted to track down the members of the group. But in a world where everything and everyone has changed…where could his quest possibly take him?

Both a modern fairytale and a skilfully woven state-of-the-nation novel, French Rhapsody combines Antoine Laurain’s signature charm and whimsy with a searing critique of the state of contemporary France.

‘Beautifully written, superbly plotted and with a brilliant twist at the end.’ Daily Mail

‘The novel has Laurain’s signature charm, but with the added edge of greater engagement with contemporary France.’ The Sunday Times

‘What makes French Rhapsody one of the must-reads of the moment is not just its off-the-wall humour, but its deep sense of melancholy. If it wasn’t so funny, you’d weep for the roads not taken’ Le Figaro

‘Anyone who enjoyed Laurain’s previous novels The President’s Hat and The Red Notebook will doubtlessly enjoy this new romp.’  Portland Book Review

‘Once again I have been swamped by Laurain’s individual take on the Gallic charm.’ The Book Bag

‘A tale of dashed dreams, lost love and rediscovered hope that is also an incisive state-of-the-nation snapshot.’ The Lady

‘Full of charming one-liners (…) I loved it’ Shiny New Books

‘Quirky and nostalgic, hilarious and satirical. A portrait of France as you may not know it! Words and Peace

‘It has been a long while since I laughed out loud so many times while reading a book. French Rhapsody is the title that had my endorphins dancing a jig.’ Coastal Breeze News

‘This well-structured dramedy weaves together the destinies of a group of colorful characters and paints a surprising picture of the eighties generation, too cocky to realize that they were being outrun by modernity.’ The French Embassy in Canada

‘Witty, nostalgic – I was completely charmed’ Woman and Home

‘The best way to describe Antoine Laurain’s latest novel French Rhapsody – is that it is a brilliant “pay off” story. It is clever and quirky and was a delight to read.’ Lisa Talks About

The Guardian Books on ‘French Rhapsody’

Antoine Laurain is a novelist, screenwriter, journalist, director and collector of antique keys. A truly born and bred Parisian, after studying film, he began his career directing short films and writing screenplays. His passion for art led him to take a job assisting an antiques dealer in Paris. Th…