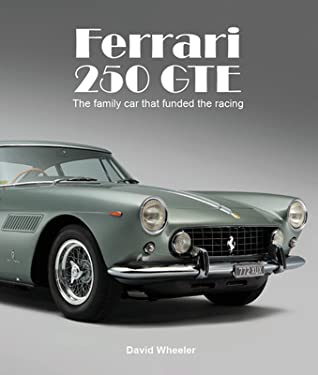 Ferrari 250 GTE – The family car that funded the racing

Buy Ferrari 250 GTE – The family car that funded the racing eBook from:

Buy Ferrari 250 GTE – The family car that funded the racing audiobook from:

‘Ferrari 250 GTE – The family car that funded the racing’ by David Wheeler is a definitive history of the design and development of the innovative 250GTE.

First seen as the course car at the 1960 Le Mans 24 hour race, the elegant Ferrari 250 Gran Turismo 2+2 Pininfarina, or GTE as it has become known, was Ferrari’s first four-seat production car and an outstanding commercial success, underwriting the company’s racing activity. Built upon the same running gear as the iconic Ferrari 250 two-seaters, the GTE continued in production until 1963, by which time 954 examples had been built. Initially popular as a “gentleman’s express” the car was typically finished in conservative colours which emphasised its stunning lines but after a few years and several owners they were sadly often neglected and came to be regarded simply as donors upon which to build replicas of other Ferraris. However, thanks to the efforts of a number of enthusiastic owners who have dedicated themselves to maintaining, restoring and preserving these wonderful cars about half of them still exist today as GTEs, valued for their beauty and history. In researching this definitive history of the model, the author consulted with respected Ferrari historians, enjoying access to their archives, and travelled extensively to view and document more than 125 examples of these cars around the world.

Background to the design and development of the innovative 250GTE in response to the new market for comfortable and spacious grand touring cars in the late 1950s
Lavishly illustrated technical descriptions of the engine, chassis, running gear and body
Evolution of the model through production of 954 examples over 3 Series, including a comprehensive analysis of the prototypes and the identities of these fascinating individual cars
Stories of ownership, preservation and restoration of these beautiful cars
Over 650 photographs and illustrations, from period documents to a current studio portrait shoot
Appendix listing of all 954 GTEs built with their original specifications and notes on their current whereabouts