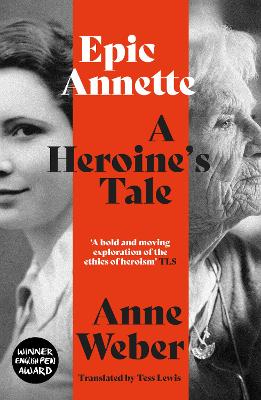 Could you put your beliefs before your family?

Epic Annette is the extraordinary true story of Annette Beaumanoir: brilliant and fierce, she was a medical student living in a world at war who, at nineteen years old, joined the French Resistance and saved the lives of two Jewish children in Paris on the eve of their deportation to the camps.

As a doctor and mother devoted to justice and equality, Annette was later found guilty of treachery for supporting the Algerian FLN in France and sentenced to ten years in prison. The story of her dramatic escape, trial in absentia and decades in exile, separated from her children, resembles that of the great heroes whose love for individuals had to compete with their destiny and love of humanity.

Annette will remain with you forever. With this gripping personal tale of heroism and grief, author Anne Weber joins Homer in her ability to conjure a titan in an epic poem.