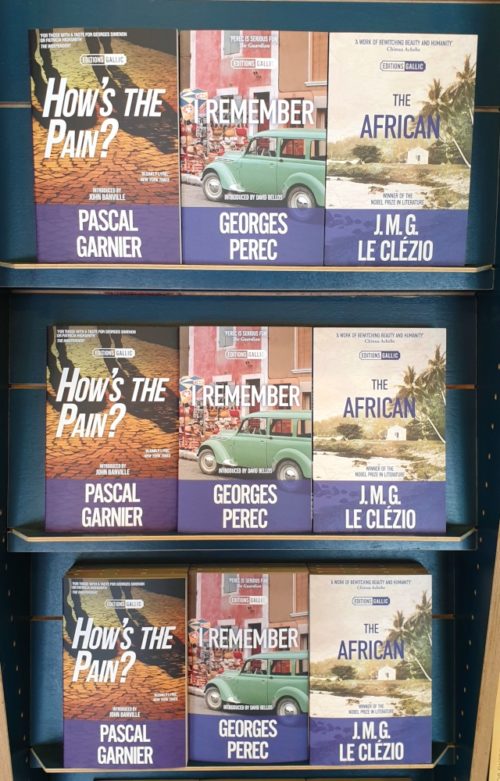 New to Editions Gallic for 2020 – a childhood memoir of Africa from Nobel Prize winning J. M. G. Le Clézio, a unique and playful memoir from the equally unique Georges Perec, and a new edition of Pascal Garnier’s defining novel, featuring an introduction from John Banville.

New to Editions Gallic for 2020 – a childhood memoir of Africa from Nobel Prize winning J. M. G. Le Clézio, a unique and playful memoir from the equally unique Georges Perec, and a new edition of Pascal Garnier’s defining novel, featuring an introduction from John Banville.

Editions Gallic returns to Gallic Books’ original mission of bringing together the very best of French in English.  A combination of classic and contemporary French literature, the collection aims to bring readers back to old favourites as well as introducing new titles from iconic francophone authors.

In 1948, a young J. M. G. Le Clézio left behind a still-devastated Europe with his mother and brother to join his father, a military doctor in Nigeria, from whom he had been separated by the war.

In his characteristically intimate, poetic voice, the Nobel Prize-winning author relates both the child’s dazzled discovery of freedom in the African savannah and the torment of recalling his fractured relationship with a rigid, authoritarian father.

Now available to UK readers in English for the first time, The African is a memoir of a lost childhood and a tribute to a father whom Le Clézio never really knew. His legacy is the passionate anti-colonialism that the author has carried through his life.

‘A work of bewitching beauty and humanity. With penetrating prose and an eye for lyrical detail, [Le Clézio] vividly captures the rhythmic space of his memoir’s African backdrop and makes bare the universal complexity of father-son relationships. A triumph!’ Chinua Achebe

‘A memory palace, a deliberately disordered evocation of the past that hopscotches through time’ Boston Globe

‘Affective and moving … The specter of colonialism ghosts through this memoir, of great men adrift of purpose, of irreconcilable worlds’ World Literature Today

I Remember by Georges Perec

Both an affectionate portrait of mid-century Paris and a daring memoir, Georges Perec’s I Remember is now available in English to UK readers for the first time, with an introduction by David Bellos.

In 480 numbered statements, all beginning identically with ‘I remember’, Perec records a stream of individual memories of a childhood in post-war France, while posing wider questions about memory and nostalgia.

As playful and puzzling as the best of his novels, I Remember is an ode to life: the ordinary, the extraordinary, and the sometimes trivial, as seen through the eyes of the irreplaceable Georges Perec.

‘A joyous, if fragmented, summoning up of an already faded world’ The Spectator

‘So full of interest and memory . . . I have enjoyed it so much’ Dame Margaret Drabble

‘On first impressions, Perec writes as if skimming playful stones across the surface of a lake. You realise later that he is also sending little pulses down into the depths. In his inventive puckish ways, he encourages us to look at what lies behind and within the familiar. In this sense, he is not just a brilliant writer but a kind and continually prescient one’ Darran Anderson, author of Imaginary Cities

‘One of the oddest works of literature ever written’ David Bellos, from the Introduction

‘Je me souviens is only a small piece of Perec-autobiography, but it is an appealing one, suggestive and whimsical’ Complete Review

How’s the Pain? by Pascal Garnier

Veering from the hilarious to the horrific, this offbeat story from master stylist Pascal Garnier is at heart an affecting study of human frailty. This Editions Gallic reissue comes complete with an introduction from Booker-winning novelist John Banville.

‘Gloriously enjoyable both as an entertainment, and as a work of art . . . The true and unflinching depiction of even the worst of what the world can do to its human inhabitants, so frail and fleeting, is never less than edifying, and surpassingly pleasurable’ John Banville, from the Introduction

‘This is remarkable fiction, cold and humane at the same time, pitch-black dark yet not bitter, ugly yet elegant’ The Complete Review

‘A tale that keeps the reader guessing as to whether the next scene will contain destruction, dark humor, or fleeting rays of hopefulness’ CrimeReads