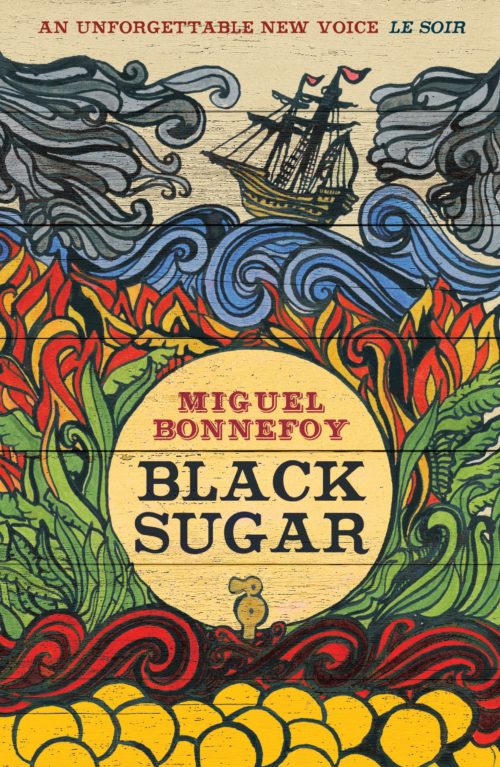 Miguel Bonnefoy’s colourful tale of a family’s changing fortunes is also the fascinating story of Venezuela’s development over the course of the 20th century.

On the edge of the Latin American rainforest, the Oteros family farm sugar cane in their remote corner of the earth.
Cut off entirely from the modern world, life is peaceful, uneventful. Until, that is, a succession of ships arrive in search of Henry Morgan’s legendary lost treasure, said to be buried deep beneath the forest floor.

Soon, the isolated villagers are exposed to all the trappings of modernity, while the travellers’ search for booty unearths more than anybody could have anticipated…

And so it was that the treasure lay buried amid scraps of sail and a pirate’s corpse, preserved within the belly of the Caribbean…

‘Gallic Books have a lovely knack for publishing quirky and engaging novels, often compact and always accessible. Miguel Bonnefoy continues that tradition with his intriguing second novel, Black Sugar. With a pitch-perfect translation by Emily Boyce, this is a beautifully crafted tale of how small loves can grow into the big ones, often quite unexpectedly.’ The Irish Times

‘Its lyricism and vivid descriptions of a tropical landscape make it worth stopping by for.’ The Big Issue

‘An astonishing novel about the rise and fall of a family over time… Black Sugar is not to be missed.’ Portland Review of Books

‘Bonnefoy’s French and South American heritage infuse the novel, it combines the best of the European tradition and magical realism. It’s a mix of folklore and exotic storytelling. Rich in description, lyrical, elegant and fantastical.’ Nudge Magazine

‘Black Sugar comes out at a time when Venezuela is in the news for violence and turmoil. But Bonnefoy’s prose bursts with pride for the region and its people, particularly the farms and farmers. At the same time, he acknowledges the colonizing forces that fomented unrest, whose influence is felt today as the country destabilizes. It’s an important book to read right now, for even though it’s fantastical fiction, it gives the reader context for the next headline.’ Necessary Fiction

‘Black Sugar is a beautiful generational saga akin to One Hundred Years of Solitude or The House of the Spirits … Bonnefoy never loses his own voice and continues to write with strokes of brilliant colours and sounds.’ The Book Bag

‘Black Sugar stands out as one of the beautiful surprises of this autumn … Here, everything is lived to the full, love passion and desire for power, fidelity and ambition.’ L’Express

‘A quite irresistible picaresque novel, in the vein of García Márquez’ Nouvel Observateur

‘(a) whistle-stop tour of a remote, seldom-touched-by-literature, and fully intriguing, but ultimately unfathomable, land’ The Book Bag

‘We see Bonnefoy in an ode to his homeland and a fable like tale of what was and maybe a feeling that is lost . This is under hundred pages long a perfect evening read.’ Winstonsdad’s Blog

‘Bewitching from the start’ Le Point

Black Sugar on The Irish Times

Miguel Bonnefoy was born in France in 1986 to a Venezuelan mother and a Chilean father. In 2013, he was awarded the Prix du Jeune Ecrivain, which previously launched the careers of Marie Darrieussecq and others. Octavio’s Journey is Bonnefoy’s first novel, written in French. It has sold more than 25…