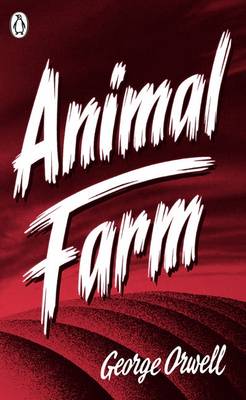 George Orwell’s chilling fable of Soviet Russia’s brutal dictatorship, “Animal Farm” brings to life in lucid, uncomplicated language the disastrous project of Russian Communism. This “Penguin Modern Classics” edition includes an introduction by Malcolm Bradbury. ‘All animals are equal – but some are more equal than others’. When the downtrodden animals of Manor Farm overthrow their master Mr Jones and take over the farm themselves, they imagine it is the beginning of a life of freedom and equality. But gradually a cunning, ruthless elite among them, masterminded by the pigs Napoleon and Snowball, starts to take control. Soon the other animals discover that they are not all as equal as they thought, and find themselves hopelessly ensnared as one form of tyranny is replaced with another. ‘It is the history of a revolution that went wrong – and of the excellent excuses that were forthcoming at every step for the perversion of the original doctrine,’ wrote Orwell for the first edition of “Animal Farm” in 1945. Orwell wrote the novel at the end of 1943, but it almost remained unpublished; its savage attack on Stalin, at that time Britain’s ally, led to the book being refused by publisher after publisher. Orwell’s simple, tragic fable has since become a world-famous classic. Eric Arthur Blair (1903-1950), better known by his pen-name, George Orwell, was born in India, where his father worked for the Civil Service. An author and journalist, Orwell was one of the most prominent and influential figures in twentieth-century literature. His unique political allegory “Animal Farm” was published in 1945, and it was this novel, together with the dystopia of “Nineteen Eighty-Four” (1949), which brought him world-wide fame. All his novels and non-fiction, including “Burmese Days” (1934), “Down and Out in Paris and London” (1933), “The Road to Wigan Pier” (1937) and “Homage to Catalonia” (1938) are published in “Penguin Modern Classics”. If you enjoyed “Animal Farm”, you might like Orwell’s “Nineteen Eighty-Four”, also available in “Penguin Modern Classics”. “It is the book for everyone and Everyman, its brightness undimmed after fifty years”. (Ruth Rendell, “Daily Telegraph” Books of the Century).