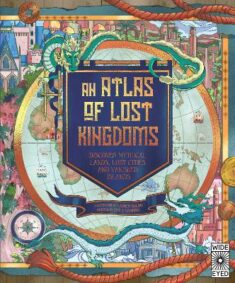 An Atlas of Lost Kingdoms

Buy An Atlas of Lost Kingdoms eBook from:

Buy An Atlas of Lost Kingdoms audiobook from:

On this quest around the world, you will discover lost kingdoms, phantom islands and even legendary continents once sought by explorers but now believed to be mythical.

For centuries, people have dreamed of finding the lost worlds of Atlantis, El Dorado and the Seven Cities of Gold. As well as shedding light on these famously elusive places, this atlas contains maps and captivating illustrations to illuminate lesser-known destinations, from the lost island of Hy-Brasil to the desert city of Zerzura.

You will learn about rich mythologies from different cultures, from the Aztecs to the ancient Britons, from the Greek legends to Japanese folklore. Most of the places in this book have never been found, but within these pages you will succeed where the adventurers of the past were thwarted.

Learn about ancient maps, age-old manuscripts and cryptic carvings that reveal clues to the whereabouts of these lost kingdoms. The journey will transport you to thoroughly other-worldly places.

From bestselling author Emily Hawkinscomes this whimsical blend of myth and history, fact and fantasy. This lavish volume will fire the imaginations of young adventurers everywhere.