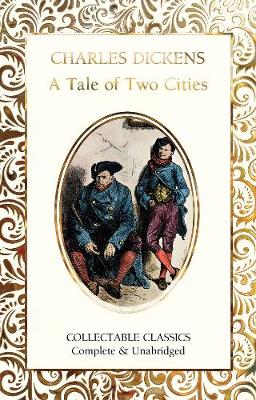 A Tale of Two Cities

Buy A Tale of Two Cities eBook from:

Buy A Tale of Two Cities audiobook from:

A complex and profound book, ‘The Tale of Two Cities’ explores the consequences of tyranny, fate and self-sacrifice. With much of the narrative played out in Paris, during the French Revolution Dickens examines the interplay between personal action, and the flow of history. Dr Manette, having travelled to Paris finds himself imprisoned in the Bastille for 18 brutal years, unable to see his kind and loving daughter Lucy. On his eventual return to London the two of them become witnesses in a treason case against Charles Darney who is accused of giving secrets to the French. Lucy finds a way of exonerating him, Darney falls in love with her and by some strange twist of fate he finally reveals the terrible secret that his own uncle was responsible for Manette’s years in the Bastille. Manette is shocked but eventually persuaded by Darney’s sincerity and true love for this daughter, so he allows them to marry, bringing happiness finally to them all.

The Flame Tree Collectable Classics are chosen to create a delightful and timeless home library. Each stunning edition features deluxe cover treatments, ribbon markers, luxury endpapers and gilded edges. The unabridged text is accompanied by a Glossary of Victorian and Literary terms produced for the modern reader.