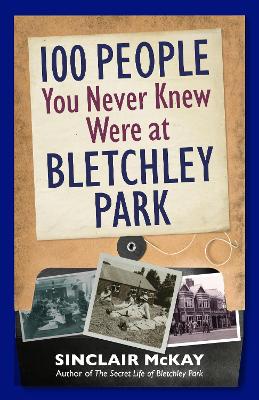 100 People You Never Knew Were at Bletchley Park

Buy 100 People You Never Knew Were at Bletchley Park eBook from:

Buy 100 People You Never Knew Were at Bletchley Park audiobook from:

The reason for the huge commercial success of Sinclair McKay’s The Secret Life of Bletchley Park was simple: for the first time it told the stories of the ordinary people (mostly women), who worked there, and what it was like. Sworn to secrecy, they never divulged their remarkable wartime service for decades. But what did they go on to achieve after the war? And what about those who did become household names, but whose Bletchley Park years remain unknown? Now Sinclair McKay tells the stories of a hundred such people, and the often equally extraordinary lives they went on to. Here are dozens of unsung heroes, who certainly made their mark after the war as well as during its finest hour: people like Home Secretary Roy Jenkins, or novelist Angus Wilson; or Jane Fawcett, a trained ballerina who went on to co-found the Victorian Society and save St Pancras Station; or James Bernard, a protege of Benjamin Britten who wrote all the music for the Dracula films; or Joan Clarke, Alan Turing’s girlfriend, who became a senior codebreaker herself at GCHQ.