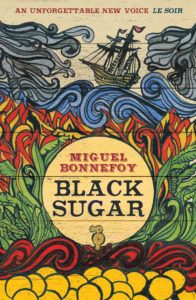 Miguel Bonnefoy is one of France’s most exciting new voices and his latest novel Black Sugar reflects that. In this Q&A, Miguel shares with us his thoughts on this novel that will take the reader to the Latin American rain forest following Captain Henry Morgan’s steps.

Describe Black Sugar in one sentence

It’s the story of a village that is looking for a buried treasure without realising it sits underneath.

I wrote it to pay homage to my country, Venezuela. I liked the idea of talking about pirates, gold hunters, strong women, shipwrecks, tropical fiestas and rum distilleries in a story where a family of rum makers live on the deep traditions of the sugar cane culture. I also wanted the book to be a metaphor of Venezuelan oil, and the characters to be the 20th century inhabitants who failed to realise that the true treasure lays in the fruits of harvesting sugar cane and not a few metres underground in a chest sealed with golden nails.

Where did the idea for Black Sugar came from?

It came from a meeting with two rum makers, a French and a Venezuelan, who shared with me the fascinating details of rum making. They talked passionately about the heritage, the aromas, the strength and greatness of rum, a spirit that is very close to Venezuelan culture.

Which is our favourite phrase of the novel?

I’d like to leave that to readers to decide. However, I am very fond of the following phrase said by the Andalusian: ‘If the stars were made of gold, I’d dig up the sky.’

How do you choose the names of your characters?

In general, toponymics play a big role as I enjoy giving my characters names that allow them to have depth and meaning. For example, in Severo and Serena there is a game of words, one is severe and the other serene and that works to highlight the opposite personalities in the couple.  The dog is called Oro (‘gold’ in Spanish) precisely because he’s been trained to bark at gold.

In the first edition of Octavio’s Journey there was a printer’s error and the eighth chapter had its number missing. A reader contacted me to say that Octavio, the character, had eaten the chapter since his name had the origin in the words octo, ocho, which means eight.

That simple treasures are the richest.

What’s next for Miguel Bonnefoy?

I’m thinking about a book on utopia. The concept absolutely fascinates me. In a dehumanized world, full of political hate and elevated borders, literature and the concept of ideal societies could play a positive role to make human kind move forward.

Who are your favourite authors?

Which is the book you have re-read the most?

A Chess Story by Stefan Zweig