News & Events > ‘Little: Her story is one of those tales about history happening to other people, the little people caught up in it.’

‘Little: Her story is one of those tales about history happening to other people, the little people caught up in it.’

Meet Edward Carey, author of Little, an extraordinary novel that will take you to a fascinating world you will never forget. In the next 13 questions, Edward will reveal little known facts of his new book, his life as a writer, favourite reads and more. 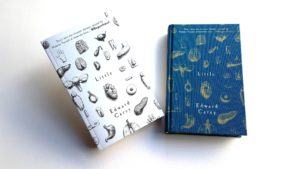 About twenty-five years ago I worked in Madame Tussaud’s in London. I stopped people from touching the wax models and also made a nuisance of myself keeping very still and frightening tourists. When I was there I first learnt the history of Marie Tussaud and couldn’t believe how extraordinary her life had been, and how amazing it was that she not only escaped France and the Revolution alive but that she became a brilliantly successful business woman. I stood beside the wax works she made for hours on end, it felt somehow like a way of getting to know her. Her story is one of those tales about history happening to other people, the little people caught up in it…she was a foreigner too, a Swiss, and the Swiss were despised by the French after the Swiss Guard fired on a crowd of protesting civilians. Being Swiss at that time was almost a crime.

Where did the idea for the title came from?

I struggled for ages with what to call it, and it wasn’t until I’d focused upon Marie being so very small that ‘Little’ seemed right. She’s a crumb of history, a footnote, but from her small stature she looks up and finds her place. I thought of her as incredibly resilient, a small cockroach surviving in dark corners, a clot of blood, a pearl.

What kind of research did you do, and how long did you spend researching before you started writing this book?

I spent many months at the British Library trawling through books, and I lived in Paris for two six-month sessions doing more research. I wrote pages and pages of notes, I tried to immerse myself in that time before, after and during the Revolution – there are so very many books about it of course, I very nearly drowned. But then I came upon the writing of Louis Sebastien Mercier and his accounts of small everyday life in Paris, and suddenly I could properly feel it. He’s more happy writing about ratcatchers and ragpickers and horsehair wigs than about royalty and fame. He adores the ordinary and sees in it great beauty and strangeness. I loved Mercier’s writing so much that I made him a major character in the book.

I don’t know, I’m not sure I have one. Maybe Little black list.

Please tell us a special anecdote about the book

I’ve spent fifteen years writing it. It’s been every size from 750 pages to two hundred. I’ve hated it for long months at a time. I’ve given up on it three times. Many character never made it into the final draft, I had to exercise my own guillotine until I found the right story. I am now frightened to go into waxworks, they’ve begun to terrify me. Like standing beside so many dead bodies. There’s something deeply suspicious about wax figures, they’re untrustworthy. They have opinions of their own, and I’m not sure they’re good opinions.

What works best for you: Typewriters, fountain pen, dictate, computer or longhand?

I use fountain pen a lot especially when stuck,but am mostly on the computer. But also pencil and paper. I always draw the characters I write about. And I tried to draw them how Marie might have seen them.

An Unkindness of Ghosts by Rivers Solomon, not because it’s particularly underappreciated because it’s doing very well, it’s just I’d like everyone to read it. Otherwise Dombey and Son by Charles Dickens, which is up there with his best, but I don’t think is read nearly as often.

Can I have five? Jane Eyre by Charlotte Bronte; Great Expectations by Charles Dickens; The Tin Drum by Gunther Grass; The Complete Fictions of Bruno Schulz; The Ballad of the Sad Café by Carson McCullers.

The Hospital by Ahmed Bounani.

I don’t like superpowers. Maybe the ability to hear the thoughts of objects.

As a writer, what would you choose as your mascot/avatar/spirit animal?

Little is out now simultaneously on hardback, price £14.99 and paperback demy price £10.99