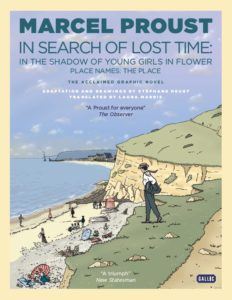 Around 1890, a young Marcel Proust filled out a questionnaire in a friend’s “confession book”, a popular type of album that was passed around social circles like a personality quiz. In response to the question “Where would you like to live?”, Proust wrote, “A country where certain things I wish would come true as if by magic and where tenderness would always be returned”.

Though he was not yet twenty, this answer offers a glimpse of the author’s voice and the convex lens of yearning through which he examined the world. This questionnaire comes from a period of the author’s life that runs parallel to the adolescent moment of In the Shadow of Young Girls in Flower, the second volume of Proust’s masterwork, In Search of Lost Time. In this volume, the narrator gets over his first infatuation with Gilberte Swann and travels with his grandmother to the seaside town of Balbec, where he is both attracted to and intimidated by the group of young women he befriends. Chief among this girl gang is Albertine, who will become the narrator’s main love and torment in subsequent volumes, especially The Prisoner and The Fugitive. The poet Anne Carson condenses it well in The Albertine Workout when she writes, “The jealous lover cannot rest until he is able to touch all the points in space and time ever occupied by the beloved.” Tenderness may be, in the Proustian universe, the only antidote to possessiveness and jealousy.

At the time of this volume, in the resort town of Balbec, the narrator and his friends are still insulated from the weight of adult passion. Balbec may not be the ideal country of Proust’s questionnaire, but it is a tender space, full of delicately wrought images that the narrator will return to over and over, as the first sightings of Albertine and her friends come to symbolize the inexperience of these early encounters. As in many relationships, the earliest images of the beloved only snowball in their significance. In later volumes, the memory of young Albertine standing by the sea takes on another tenderness—that of pressing a bruise. Balbec, an intermediate place between childhood and adulthood, possesses a hyperreal quality that is only intensified by the graphic-novel form of this excellent adaptation by Stanislas Brézet and Stéphane Heuet.

Balbec, which was modelled on the French town of Cabourg, unfolds vividly in the narrator’s mind, saturating every aspect of his experience, almost as if he were dreaming it. Unlike the more speculative section “Place Names: The Name” that concludes Swann’s Way, here the word is anchored to the world itself: “Place Names: The Place”. In a process that is familiar to every traveller, the narrator confronts the differences between what he imagines Balbec to be and the place he ultimately discovers.

As always, Proust is tremendously sensitive to the shifting social and physical landscape. In her essay “The Weather in Proust”, Eve Kosofsky Sedgwick calls both the narrator and his grandmother “human barometers”, responding to the slightest change in pressure between interior life and exterior world. Their intergenerational communion is perhaps the most tenderly calibrated of all. When the narrator and his grandmother wake up in the morning, they communicate by knocking on the thin wall between their hotel rooms. Sedgwick calls this divider “as eloquent a membrane as if it demarcated the chambers of a single ear, or heart”. This trip to Balbec is all the more poignant because it represents some of the last uninterrupted time the narrator and his grandmother will spend together before her death in volume 3. When the narrator next visits Balbec, he will be thinking through her loss, looking for a place where he can allow himself to be overwhelmed by his feelings of grief.

But in this volume, the narrator can focus on his experience of Balbec in all its initial freshness. In this time of relative innocence, he has no reason to fear his curiosity about the adult world and its enticements. Some readers may know this volume by its first English title, Within A Budding Grove, but that rendering leaves out the essential girls. The more literal version of the title, In the Shadow of Young Girls in Flower, captures the enveloping veil of the narrator’s infatuation and his pleasure at being overshadowed and outmanoeuvred by these girls as they play children’s games on the bluff, familiar amusements whose gestures suddenly take on new interest, offering a chance to flirt. These intoxicating afternoons are highly visual and tactile, especially in Heuet’s excellent drawings. The cerebral narrator suddenly finds himself closely observing what interests his new friends, like the “vulgar” delights of the high season—dances at the casino, yachts, and horse races.

This shift in the narrator’s perspective changed how I thought of the project as a whole. As Arthur Goldhammer aptly put it in the introduction to his translation of the first volume in this series, the graphic-novel adaptation of In Search of Lost Time resembles “a piano reduction of an orchestral score”. But, to me, Brézet and Heuet’s version of In the Shadow of Young Girls in Flower evokes a more visual metaphor. If Proust’s novel is a great tableau, this adaptation of the second volume is like a sketch that lays bare the gestures of the original masterpiece. This emphasis on sight is reflected by the opinions of Albertine, as she gradually becomes the animating force of the narrator’s romantic obsession. He jokes about her terrible taste in music but notices that she speaks with authority about visual art.

Where volume 1 has the composer Vinteuil and the “little phrase” of his sonata, this volume has Elstir the painter and his drawings. On one of his walks with the narrator, Elstir compares his final painting, Carquethuit Harbour, to his sketch: “a little drawing where you can see the contours of the beach much more clearly”. That sketch has something in common with this adaptation of Proust. Each sentence and speech bubble carries the weight of a contour, a defining mark that holds the experience together. Heuet’s images create the flavour of Proust’s descriptions in all their decadence, sustaining the force of the lines excerpted from the original.

As a translator, my primary challenge was to stay immersed in Proust’s tone even in the shorter pieces of text. In these moments, there is little scaffolding for Proust’s more baroque inclinations. The text of this adaptation has its own natural rhythm that builds as a reader’s eye moves across the page. Brézet and Heuet have very gracefully intertwined Proust’s sentences with the images, and I have done my best to keep the text in step with the drawings. This alignment meant that I could not rearrange the order of some phrases in a sentence, which I otherwise might have done, since I judged that these words were better served by their accompanying frames.

It bears noting some moments within these frames that may startle the contemporary reader – especially concerning the Baron de Charlus. Before the baron arrives in Balbec, Proust hears a terrible story about Charlus beating a prominent man almost to death because the man propositioned him. In fact, this story is likely an elaborate cover for Charlus’s own queerness, which Proust depicts over the course of the volumes. Proust explained his characterization of Charlus in a letter to André Gide: “I tried to portray a homosexual infatuated with virility . . . I don’t in the least claim that he is the only type of homosexual. But he’s an interesting type which, I believe, hasn’t ever been described.” As a teenager, Proust was open with his friends about his desire and affection for other boys, and from this early age, he defended gay and lesbian love as no less moral than love in straight relationships. The fact that the narrator’s love interests have feminized male names (Gilbert, Albert) is a wink at this personal history. Albertine herself goes on to have affairs with women, which sparks the narrator’s jealousy.

Another startling aspect of the story concerns the Jewish visitors to Balbec. One political undercurrent in this volume is the unfolding of the Dreyfus affair, which stemmed from the wrongful conviction of Alfred Dreyfus, a Jewish captain in the French army, who was condemned to prison and stripped of his rank in 1894 for supposedly selling military secrets to the Germans. Proust was an outspoken defender of Dreyfus, which set him against many members of French high society. In this volume, Proust frankly depicts the anti-Semitism of the haute bourgeoisie and the aristocracy at the time, as well as the drama of social assimilation. Aimé, the maître d’hôtel, tries to ingratiate himself with the narrator by saying that Dreyfus is “guilty a thousand times over”, because he imagines that’s what the narrator will want to hear. Proust’s own relationship to Jewish culture is complex: though his mother was Jewish, he never formally practised a religion—except, perhaps, the adoration of memory.

Yet it took Proust years to become the high priest of literary remembering. The prestigious publishing house Gallimard, on the advice of André Gide, initially rejected volume 1 of In Search of Lost Time, which Gide came to deeply regret. Proust sent the book to be published by Grasset at his own expense. In the Shadow of Young Girls in Flower was a breakthrough for Proust, since it was at last picked up by Gallimard and won the 1919 Prix Goncourt, France’s most prestigious prize for a novel. And from there the world succumbed to the irresistible power of Proust’s sense of observation, his portrait of a mind on the page. Even the questionnaire he innocently filled out in a friend’s album has come to bear his name, lending this simple parlour game a prestige that has drawn celebrities from Lauren Bacall to Karl Ove Knåusgaard.

I’m grateful to the previous translators of Proust whose work I have consulted, and particularly to Arthur Goldhammer. This volume contains two flashbacks to volume 1—Swann’s comment about Balbec and the scene from the Verdurins’ where M. Biche (aka Elstir) entertains the gathering in a way he regrets. I have reused snippets of Goldhammer’s excellent translations of these moments to preserve the continuity between volumes of the graphic novel. I also want to thank Alice Kaplan for her sharp eye and her generous advice about the translation. Evelyne Bloch-Dano’s Une jeunesse de Marcel Proust and Pauline Newman-Gordon’s Dictionnaire des idées dans l’oeuvre de Marcel Proust were indispensable references. And thanks to Henry Sussman, whose brilliant, creative lectures were my first introduction to Proust.

Proust himself had a high regard for adolescence, especially its spontaneity. He wrote that it was a time when people can learn from observation, without the blinkers of social norms. But Proust never lost this ability. Reynaldo Hahn, Proust’s longtime lover, once described Proust stopping to examine a rose bush, entirely transfixed: “How many times I’ve observed Marcel in these mysterious moments in which he was communicating totally with nature, with art, with life, in these ‘deep minutes’ in which his entire being was concentrated.” The mark of Proust’s art was to stumble again and again on new visions of something familiar. I hope this rendering will be read in that spirit.

Buy ‘In the Shadow of Young Girls in Flower’ now 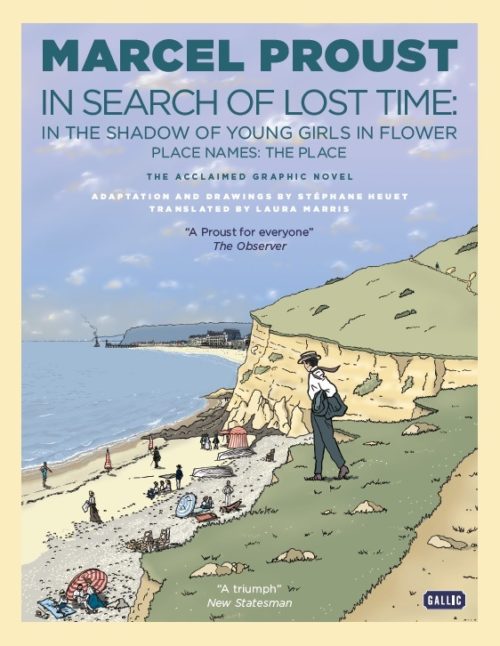