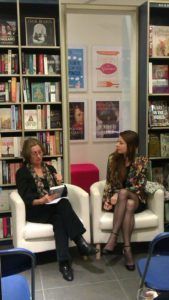 Does a book need likeable characters? The question came up at an acquisitions meeting yesterday. Of course there are plenty of other considerations – how gripping the plot is, how distinctive the voice, how fascinating the themes – but do you need to get along with the characters to really love a book?

I can remember almost literally falling in love with characters from books as a child and teenager, and being quite bereft at having to part ways when I reached the final page. Very occasionally this has happened since, with John Irving’s A Prayer for Owen Meany, or Leo, L.P. Hartley’s The Go-between. At other times, I have identified strongly with aspects of a character even, or especially, when they were not wholly likeable. Emma Bovary may be a silly romantic, poisoned by reading the wrong sort of books, but her failure to express herself without recourse to cliché struck (to coin a cliché) a chord. Her limitations are what make her story so frustrating and so moving. This passage in particular stuck in my mind:

‘as if the fullness of the soul did not sometimes overflow in the emptiest of metaphors, since none of us can ever express the exact measure of our needs, or our ideas, or our sorrows, and human speech is like a cracked kettle on which we beat out tunes for bears to dance to, when we long to move the stars to pity.’ (From the 2010 Penguin edition)

In fact, the translator of this edition, Lydia Davis, confesses to not being an Emma Bovary fan herself, as Julian Barnes discusses in his review. If a reader doesn’t always need to like the characters, does the translator? Barnes’s view is that Davis’s lack of sympathy for Emma explains some of his perceived weaknesses in her translation (mirroring the syntax of the French and taking us ‘too far away from English’, a lack of passion somehow coming across in the language), but doesn’t stop it being an accomplished piece of work:

‘What does Davis mean by saying that Emma Bovary doesn’t think or feel? The novel is all about the perils of (wrong) thinking and (false) feeling. Perhaps she means ‘doesn’t think or feel in a way that I approve of’. As for complaining that Emma isn’t ‘admirable or likeable’ – this sounds like the most basic book-group objection. Lydia Davis’s Madame Bovary shows that it’s possible to produce a more than acceptable version of a book with which you are profoundly out of sympathy. In that sense, it confirms that translation requires an act of the imagination as well as a technician’s proficiency.’

Davis’s honesty is quite brave, opening her up as it does to obvious criticism. She contends that Flaubert didn’t find his heroine likeable or admirable either, but he did empathise with her enough to be physically sick writing her death scene… I can’t imagine a translator going that far; after all, they’re not ‘our’ characters, except in the sense that any character comes alive in the reader’s head. You might inhabit the text for the few months you are working on it, but it doesn’t compare to the years of genesis those characters have had in their authors’ minds.

Translators are readers, and I think a translation can come along more quickly and satisfyingly, in the same way as a book is read with more gusto, when you feel some kind of affinity with the characters, even if you don’t actually “like” them. For example, there’s a bit of a twinkle in the eye of many of the characters in Pascal Garnier’s noirs – from serial killers to dull provincial nobodies – which makes them compelling. As AS Byatt writes in an introduction to Madame Bovary: ‘Emma Bovary is indeed ‘really too small’ [as Henry James criticised] but there is a sense in which she is a type of everywoman. Flaubert’s relentless and fastidious observation and creation of his small world is itself a form of contemplation. He shows us laughter, irony and fear. And in the end gentleness, for sad, stupid, honest Charles, and silly, greedy, unsatisfied Emma.’ We can identify with a character’s flaws sometimes more strongly than their attributes, and the ways in which they are imperfect can make them appealingly human and universal.

Novels with ambiguous characters can provide some of the meatiest, ultimately most satisfying reads – particularly ripe for book group discussions. The protagonists of Muriel Barbery’s bestseller, The Elegance of the Hedgehog, present challenges to the reader. The determination of Renée, the secretly cultured concierge, to keep her erudition under wraps is perhaps difficult to comprehend, while the precocious pre-teen Paloma living in one of the grand apartments upstairs and recording her ‘Profound Thoughts’, is not instantly appealing. Yet over the course of the novel, thanks to the arrival of a new neighbour, they are both forced to re-evaluate their approaches to life. In a very un-X Factor, philosophical way, they undergo a journey which changes them.

At our event with The Confidant author Hélène Grémillon in conversation with her translator Alison Anderson last week, one of the most interesting moments for me was when Alison asked Hélène if she particularly sympathised with Annie or Madame M. in their conflicting accounts of the same events from the outbreak of World War Two. I was sure she would say Annie, the younger, poorer woman who becomes caught up in an ever more sinister tangle of lies. Alison Anderson expected the same answer, but in fact Hélène said that she had written The Confidant precisely to tell the story of Madame M. and her infertility at a time when there was little advice and support available for women, and that she was most definitely on her side. In my view, for the author, translator and reader to come away with such different takes on a character is a sign of a remarkable book.