We are delighted to bring you a French modern classic, Michel Déon’s The Foundling Boy (Le Jeune Homme Vert), first published in France by Gallimard in 1975 and now translated into English for the first time by Julian Evans.

Following in the tradition of Fielding, Déon tells of the life and adventures of his foundling protagonist Jean from his discovery one summer’s night in 1919 by childless couple Albert and Jeanne Arnaud on the Normandy estate they manage, to his adventures in Rome, Paris, London, and the south of France, as another war beckons. 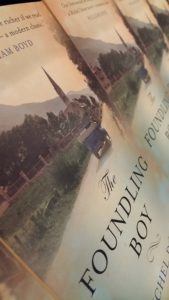 Jean opened his eyes onto a marvellous world, filling his lungs with the air of peace and freedom, a world where the brave were rewarded and the guilty pardoned. A great epoch was dawning. There would no longer be need of soldiers: Albert, along with many other veterans, was seeing to it, and of all the politicians who held forth in those years he listened to, and read, with most warmth and emotion those who promised an end to those wars for which men departed joyously, flowers in their rifle barrels, and from which they returned with a wooden leg where their left leg had been. I forgot to mention that Jean was born in the year of the treaty of Versailles, 1919; that since our first sentence we have been in Normandy – the hawthorns, the sound of sea against cliffs; and that Albert’s leg was left behind in the mud at Verdun in the course of one of those futile attacks that some generals seem to have a knack for …

The hero of this astonishing Bildungsroman, Jean Arnaud, has been heralded as one of French literature’s great adolescents, joining the ranks of Flaubert’s Frédéric Moreau, Stendhal’s Julien Sorel and Alain-Fournier’s Augustin Meaulnes. Through him, we encounter a cast of earthy characters such as the lovable philanderer Monsieur du Courseau, aristocratic owner of the estate of which Albert and Jeanne Arnaud are caretakers, whose travels south at the wheel of his Bugatti give us a window on the changing face of the Côte d’Azur, as sleepy fishing villages become glamorous resorts.

During the 1950s, Michel Déon became associated with a group of writers referred to as the Hussards (after Roger Nimier’s novel, Le Hussard Bleu) known for their opposition to the prevailing Existentialist current in literature as popularised by Sartre.

When Le Jeune Homme Vert was published in 1975, its focus on imaginative storytelling rather than formal experimentation or philosophical musing marked it out as a breath of fresh air. Here was a novel that did not adhere to any doctrine and whose characters were rich and rounded, rather than mere mouthpieces for a particular ideology.

Le Point declared, ‘Le Jeune Homme Vert illustrates the victory of good taste in its war of independence against the intellectual elite’. Le Figaro’s reviewer was relieved to open the novel and find ‘not a child in care, self-taught in sexology and proud to be potty-mouthed, but a true babe in a basket … a child placed on the threshold of our imagination’, while La France Catholique ran an article entitled ‘The Return of the Novelistic Hero’. Yet not everyone was won over; Angelo Rinaldi writing in L’Express described Déon as ‘one of those guileless writers who seems unaware that Marx or Freud ever existed’.