Fiction genres: Just not my type 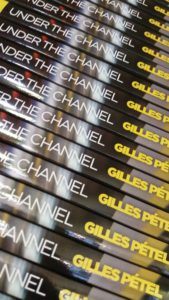 I’ve recently been working on the cover brief for a novel we’re due to publish next year, Under the Channel by Gilles Pétel. As the title suggests, the Channel tunnel figures in the plot; it’s the scene of a murder in the first chapter. Intriguing a premise though this is, I’ve been anxious in the cover brief to underline the fact that actually, most of the story takes place in London and, while the investigation of the crime forms the framework for the plot, this isn’t what you would describe as a crime novel, or detective fiction, or a police procedural, or whatever else you want to call a book with murders and policemen in it. And if we were to package it as any of those things, we would be misleading the reader scanning the bookshop tables, and once they got it home they’d probably be puzzled within pages. Our ‘busy modern lives’ (honestly, when were people not busy?) mean we have little time for choosing, and even less time for reading a book that’s just not our cup of tea, so to help us find something we’ll enjoy, we expect things to be clearly and honestly labelled.

Labelling, though, as we know on closer inspection of our lasagnes, isn’t always a straightforward business. Perhaps you want to sneak in something that might put people off if you shout about it too loudly. I remember being a bit unsure when a friend pressed the amazing Never Let Me Go into my hand, whispering, ‘It’s sort of science fiction … but it’s good’; no wonder Faber only hinted at ‘a darkly skewered version of contemporary England’ in their blurb. At a publishing seminar recently I made the mistake of enthusiastically describing one of our books as ‘existential’. ‘NEVER use that word in a marketing meeting,’ I was told by one colleague; another had already nodded off.

So, if Under the Channel isn’t a crime novel, what is it? Essentially it’s a light-hearted exploration of identity, of how we see ourselves and how others see us, and how this can change unexpectedly. It’s about the labels we use to categorise people – gay/ straight, good/ bad – and shows us where they fall down. The victim at the centre of the murder investigation proves elusive, described by most who knew him as a nice guy, but by spurned lovers as the scum of the earth. Who would be any different? And the macho French policeman sent in to solve the crime turns out to be no more certain of himself.

We know we shouldn’t put people in boxes, yet to some extent we all do; it’s reassuring in some way. It’s the same for books; we know they don’t necessarily fall neatly into a category (they are, after all, the child of a unique and complex consciousness), indeed that’s often what makes them interesting. Yet, for the purposes of describing the book succinctly to prospective buyers, publishers choose a marketable element and go with it. Every so often the simplification backfires and comes across as an insult to the reader’s intelligence; the practice of calling books with some degree of romantic storyline ‘chick lit’ and splashing pink all over the cover, for example. Working as we do alongside a bookshop means we at Gallic can conduct our competitor research with lazy ease, and while there are publishers who put a lot of effort into making their covers original, special and beautiful, it’s also striking how many look exactly the same – usually a photographic figure with his or her back turned, shorthand for ‘Ooh, a bit mysterious’, or a blatant copy of a bestseller’s cover in an attempt to piggyback on its success.

When we started publishing the novels of Pascal Garnier, we decided to create a cover look for all his titles. As an unknown author in the UK, we wanted to build a recognisable ‘brand’ for him. What seemed to be a common theme through all four of the books we had acquired was their darkness and the criminality in their plots. If Garnier fitted any genre, it was noir; after all, he had been likened to the great Simenon. Yet Garnier never saw himself as a ‘noir’ writer, resisting what he saw as ‘genre apartheid’. He was a man of varied interests, painting and writing children’s books as well as those described as noir. And the novels we have published by him are slight in volume, but incredibly multi-faceted. There’s brilliant, twisted black humour (blogger Winstonsdad likens the brother and sister protagonists of The A26 to Edward and Tubbs in The League of Gentlemen); there’s beautiful imagery; hell, there’s even some existentialism in there. One of the most thoughtful reviews of The A26 came from Tomcat in the red room, who debated the merits of describing the book as ‘Horror-fiction-literary-black-comedy-noir’, or as a modernist novel, before concluding, ‘whatever you do decide to call The A26, the book is absolutely fantastic.’

Once we’ve got to the end of a book, the genre it may or may not have belonged to becomes largely irrelevant; all that matters is whether we found something in it to enjoy. The challenge, of course, is getting people to pick it up in the first place …

Buy ‘Under the Channel’

See all book by Pascal Garnier