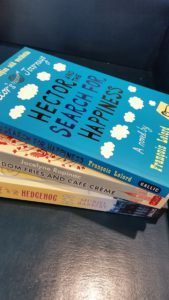 So French books (other than those of Michel Houellebecq) don’t sell abroad, according to a BBC Magazine article, because of the popular misconception that all French authors are too clever by half and more interested in navel-gazing than story-telling.

There are undoubtedly some styles of writing that are popular in France but more difficult to sell here – ‘autofiction’, that blurring of memoir and fiction, for example, has never really crossed over the Channel. But plenty of French authors write cracking crime, thrillers and readable literary fiction too, and while it’s fair to say that few contemporary French authors have become household names in the UK, many have had considerable success in recent years. From our own list, Antoine Laurain, previously unpublished in English, had his novel The President’s Hat selected for the Waterstones spring book club earlier this year, while the American Booksellers Association chose it for a major independent booksellers’ promotion. And back in 2008, The Elegance of the Hedgehog, Muriel Barbery’s tale of a Parisian concierge and a precocious twelve-year-old living in the apartment block she manages – which some feared would be too philosophical for an Anglo-Saxon readership – found huge success on both sides of the Atlantic. Many more of our authors have found dedicated fans in the UK, enthusiastic praise from critics and support from passionate booksellers; not blockbuster sales perhaps, but how many books of any provenance become runaway bestsellers?

And what about the news that Penguin USA is reported to have paid a record advance for rights to publish the English translation of ‘literary thriller’ The Truth About the Harry Quebert Affair, a novel written in French by Swiss author Joël Dicker? They’ll certainly be hoping that book sells, and with the rights having been picked up in the UK by Christopher Maclehose, who once had a hunch Stieg Larsson might do OK over here, there’s a pretty good chance they’re onto something. But then Dicker’s Swiss, maybe the Swiss aren’t such abominable navel-gazers.

Isn’t that the ridiculous thing? Does anyone really believe that all authors of the same nationality write in the same way? That all Frenchmen wear stripy tops and berets? Surely readers should be credited with a bit more discernment than that.