News & Events > Captain Panic and ‘The Hope Fault’: on being anxious in an uncertain landscape

Captain Panic and ‘The Hope Fault’: on being anxious in an uncertain landscape

All my life I’ve been a worrier, often anxious and – at times – prone to panic. I’ve panicked in waves. I’ve panicked on planes (sweating, swearing, singing the plane down to land). I’ve been panicked by dogs, and magpies, and swans (though not all at once), whether or not they seemed likely to bark or bite, or swoop, or hiss. I’ve panicked when panic’s clearly uncalled for: in a supermarket carpark, in a shoe shop, at a farewell afternoon tea for a workmate, or at the Sunday market on the Wellington waterfront.

My brother (the king of nicknames) calls me Captain Panic, a name he came up with when he and his family visited us here in New Zealand a dozen years ago, and we drove a loop around the North Island, seven of us – three adults, four kids – crammed into a 4-berth, falling-apart campervan that we dubbed the Worst Campervan in New Zealand. Late one afternoon, we found ourselves heading down a too-steep, too-narrow unsealed road. My brother was driving, and he dismissed my concerns – ‘Yeah, yeah, it’s alright Captain Panic, we’re fine’ – until the point at which it became very clear, even to him, that we were not fine. We were the opposite of fine. We couldn’t go any further forward, nor could we turn around. So, as the light dimmed, and Captain Panic panicked, my brother reversed us – slowly, slowly – uphill. My sister-in-law got out and walked ahead, calmly guiding the way with hand signals and a torch. At a certain stage we got all of the kids (and Captain Panic) out of the van. Just in case the van went off the road and over the edge, you understand.

We didn’t go over the edge. My brother successfully reversed the Worst Campervan in New Zealand to safety. The only lasting evidence of our episode of extreme campervanning was my new nickname.

Like the Worst Campervan in New Zealand, my novel The Hope Fault is filled with family, and propelled (sometimes in reverse) by anxiety. Mothers worry about children, children worry about parents, friends worry about friends and about the children of those friends. At certain moments, that worry – the anxiety that lies under the surface of the novel, like a fault line overdue for movement – shifts towards panic. Poor choices are made. Behaviour is questionable, and is questioned by others. And yet … and yet … life goes on, and so does the novel. 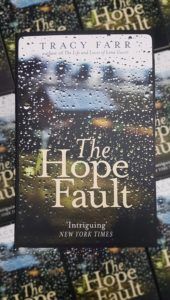 When I first started work on the manuscript that would become The Hope Fault, I thought it was going to be about a lot of things: family and celebration, transformation, resilience, the nature of home; geology and maps and texts, threads and stories. It wasn’t until I came to do final revisions on the novel, though, at a point when I had some mental and critical distance from the text, that I realised the extent to which the book is about uncertainty and anxiety. I’m sure that my own long-felt and generalised anxiety crept in and contributed, but I also blame it on a kind of survivor guilt, bordering on shame, that I felt in response to the devastating earthquakes that hit Christchurch in 2010 and 2011, and that hovered over me as I wrote: it should have been us.

Here in Wellington, where I live, we’re at the boundary between two tectonic plates, and we know that we’re overdue for a big shake (the Worst Earthquake in New Zealand?). The Australian Plate slides and rides over the Pacific Plate – slowly, slowly – and Wellington is bang in the resulting earthquake-generating zone. One of the zone’s most active fault lines, the Wellington Fault, runs right through the city, cuts across the motorway. You can see the line of the fault on maps, or as you fly into Wellington (singing, panicking) from the north; there are places in the city where you can see its marks in the landscape.

We know the risks of living on top of the fault line that geologists (in 2008, before the Christchurch earthquakes) called ‘New Zealand’s most dangerous geological hazard’. We all have our emergency kits (food, water, radio, torches) at work and in the home; we have apps and alerts pinging #eqnz and Richter scale readings to our phones, and tsunami evacuation routes are marked in bright blue paint on Wellington’s streets. We live with this, and we (mostly) manage the worry, the anxiety, and – occasionally – the panic it might cause. We live with the certainty that earthquakes will happen, and we manage the associated uncertainty: where will it strike, when, which fault, how big, how strong, how long will the shaking last?

That’s the nature of earthquakes, and geoscience, and probability; but it’s the nature of life, too, isn’t it? I’ve come to think of it as the unsettling certainty of uncertainty: the only thing we can be certain of is our uncertainty about where and when and what we might face, and what might be the consequences of any literal or metaphoric (or fictional) shifting of the ground under our feet.

And yet … and yet … we live with it. We (mostly) manage it. And sometimes, we write about it.