To celebrate Bookshop Day, run by the Booksellers Association, we teamed up with two Gallic Books authors, with new titles out this Autumn, to curate bookshelves featuring their favourite reads and literary inspirations. Though Bookshop Day has been and gone, you can still purchase all the books chosen by our authors on our website using the links provided. 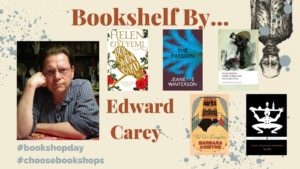 Author of Times Book of the Year Little, and The Swallowed Man (out November 5) Edward Carey shares a list full of reimagined myth and folklore, with a few glimpses of London long ago…

The Passion by Jeanette Winterson – The Passion is a fairy tale about survival and broken-heartedness, cruelty, obsession and madness.

The Vet’s Daughter by Barbara Comyns –  A uniquely vivid, witty and touching story of love and mystery in Edwardian south London.

London Labour and the London Poor by Henry Mayhew – An extraordinary work of investigative journalism, a work of literature, and a groundbreaking work of sociology. 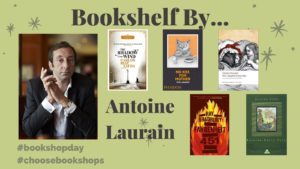 Antoine Laurain, bestselling author of The Red Notebook and The Presidents’ Hat presents a selection of classic fairy tales , as well as books about books, for book lovers, much like his latest release The Readers’ Room…

The Shadow of the Wind by Carlos Ruiz Zafón –  a stunning literary thriller in which the discovery of a forgotten book leads to a hunt for an elusive author who may or may not still be alive. (tr. Lucia Graves)

No Kiss for Mother by Tomi Ungerer – If there’s one thing Piper Paw hates, it’s being kissed by his doting mother, Mrs Velvet Paw. And one day she does the unforgivable: she kisses Piper in front of his friends!

The Complete Fairy Tales by Charles Perrault – Perrault’s tales were enjoyed in the salons of Louis XIV as much as they were loved in the nursery, and it is their wit, humour, and lively detail that capture the imagination of adult and child alike. (This edition tr. Christopher Betts)

Fahrenheit 451 by Ray Bradbury – The hauntingly prophetic classic novel set in a not-too-distant future where books are burned by a special task force of firemen.