Book review: The Age of Innocence 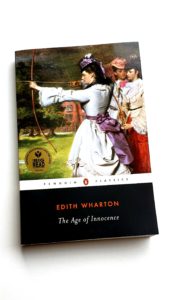 I do not make a habit of re-reading because of fear.  It is too disappointing to discover a book I love is not as good as I recall.  Memory is fickle, as is time, and what appealed once is not guaranteed to appeal always.  Being pedestalled, a favourite will always fall further and harder.  Revisiting Edith Wharton was therefore a risk.  The Age of Innocence was the only book I ever studied that I enjoyed rather than endured.  There was about it something to appreciate other than handily essayed themes on which glib judgements could be slapped, something the deluge of symbolism and wet hysteria of The Go-Between and the excessive, introverted doom of Thomas Hardy did not have.  It was a book I was grateful for being made to read.  It has a special place in my heart.

Which, luckily, it has retained.

Written in 1920, The Age of Innocence is a modern novel.  Its protagonist, Newland Archer, is a modern man, with 20th century sensibilities that do not sit comfortably with 19th century New York.  Newland lives exclusively among the strictly codified world of New York Society, a self-contained, self-appointed aristocracy that adheres to form, looks down on interlopers from lower classes and foreign countries, and clings to habit.  He is engaged to marry May Welland, pale, beautiful, dutiful and the finest of the young New York ladies.  The future Mr and Mrs Newland Archer are the epitome of New York, of Society, of breeding and manners.  And then along comes May’s cousin, Ellen Olenska, to ruin it all.

Ellen is a countess, estranged from her European husband, a count and philanderer, returned to the fold of her childhood but trailed by unspoken allegations of adultery.  She is dark and beautiful.  She is independent.  She wears dresses that are not fashionable and lives in a part of town frowned upon by her cousins (among the people who write).  She attends parties on Sundays and associates with those she chooses, not those chosen for her.  She is everything May Welland is not.  Her non-conformity is an affront to society and an obstacle to her return; as Newland is drawn into the family’s efforts to successfully reintegrate Ellen he is instead drawn toward her.

The Age of Innocence is a simple story.  A man falls in love with a woman he cannot fall in love with.  You cannot help but sympathise with Newland as he recognises Ellen’s loneliness, realises his own desire for her, grows frustrated with his life and the world that confines him, and discovers all that made May so perfect for him in truth renders her insipid and shallow and passionless.  But this simple story is not destined for a simple resolution: the genteel aristocracy have teeth, and May is not as vapid as Newland comes to imagine.

New York society is not the virtuous bastion of taste and standards it claims to be.  Hypocrisy, rarity and snobbery underpin all.  Change is discouraged and ignored until its inevitability is assured and then welcomed as if it had always been thus.  Marriage vows are held sacred and the philandering of the husbands happily but quietly gossiped about; Ellen’s alleged extra-marital relations threaten real scandal.  Moral lapses are loudly decried, usually to screen the moral lapses of the decriers.  Julius Beaufort, vulgar and foreign (English) and brash and of his own mind, is unwanted and unfashionable, but he is rich and he has the finest ballroom in the city, and although his eventual ruin kicks up a deplorable stink of dishonour, the gap he leaves is mourned, if only because some new vulgar, moneyed upstart will take his place.  The Sunday parties Ellen’s attendance prompted muttered disapprobation of become an established part of the routine for all.

This is a novel that is all polite discourse, carefully chosen words and Newland’s increasing inner turmoil.  So much is unspoken and so little actively done.  But the tension, especially in the second half, is tremendous, more so when an outcome, upon re-reading, is inevitable.  Newland is determined and willing to risk all, but New York is not ready to risk Newland.  It is a world of ritual, where dinner parties are quiet battlefields behind which the will of society will either succeed or fall altogether.  Society is a veneer to mask the flexibility of rules that are not as rigid as they are held to be.  The rules, however, are collective.  Individual disobedience is insufficient to bend them, as Newland and Ellen and Julius Beaufort discover in each of their ways, large and small.

I knew The Age of Innocence was good, I had just forgotten it was this good.  Wharton is precise and acerbic, deftly portraying the upper class society she had grown up in, critiquing it and rebelling against it.  Mannered, sharp, passionate, and genuinely exciting, it has a great deal to say about human nature, hypocrisy, the fallibility of artificial standards and the realisation of the individual self.  It is reassuring to be reminded why I thought it so long one of the best novels I have read, a pleasing constant, unlike the world and standards it portrays.

Buy ‘The Age of Innocence’