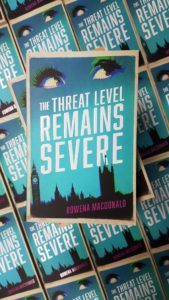 When I first started writing The Threat Level Remains Severe, my novel set in the House of Commons, one of the themes I wanted to explore was the clash between public and private life. The House of Commons is a very public, very formal place. As you walk through grand vaulting spaces such as Central Lobby or Westminster Hall, you feel on display. The architecture encourages you to stand up straight and walk with dignity. It’s a building that forces you to act like an adult. And yet behind my colleagues’ civilised facades, I was sure secret passions, resentments and entirely unprofessional thoughts were seething away. As my character Grace surmises: while people sit in meetings discussing heavyweight matters of policy and public import, ‘the most strange and rococo imaginings, the most unlikely hopes and fears, could be taking place’ inside their heads.

Work, or white-collar office work at least, forces you to dissemble, to assume a bland mask of professionalism. You are supposed to remain in control. You are not supposed to swear or shout or cry or reveal your inner weakness. Brett, the character in my novel who is most successful in career terms, is always entirely smooth. Gavin, the character who hasn’t been promoted in fifteen years, is visibly unravelling at the seams and unable to hide his private weirdness. As he says to Grace, ‘work is all about pretending to be something you’re not…the ideal worker is like a robot…it’s inhumane the way work-life is so much about pretence’. The drama in my novel arises when my characters’ pretence of inscrutable professionalism begins to falter, when their private selves begin to be revealed.

Our sexual selves are our most private selves, which is why people tend to keep office romances under wraps, at least until they’ve been neutralised into the respectability of a steady relationship. Brett and Grace engage in secret trysts in the stationery cupboard. Brett won’t even allow Grace to send him flirtatious emails, in case the IT staff can read them. He knows we have to pretend we’re not animals at work.

Which is why it is surprising to discover that the illicit behaviour of my fictional characters is tame compared to what has been going on in the House of Commons in reality. In the midst of this august institution, when they were supposed to be concentrating on the serious business of government, senior cabinet ministers – people you might have thought adept at corporate-style dissembling – have been expressing their most base desires quite freely with barely a care for workplace propriety (let alone propriety towards women). The carapace of professionalism has been revealed to be as thin and flimsy as I had always suspected.