News & Events > Antoine Laurain on ‘The Portrait’ and more

Antoine Laurain on ‘The Portrait’ and more 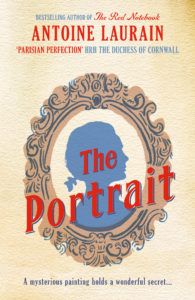 It’s the story of a man who buys a painting at auction: a portrait which curiously resembles him but was painted … in the eighteenth century.

This was my first novel, and I think it will appeal to readers who enjoyed The President’s Hat and The Red Notebook. I’m very fond of The Portrait because it introduced many of the elements you’ll find in my later books: a kind of modern fairytale, and the idea that a stroke of luck and a touch of magic can be waiting just around the corner…

I wrote this book while working as an assistant to an antiques dealer in Paris. The world of collectors and auction houses described in the novel was a huge part of my life at the time. And I wrote more than half the book in the shop! That’s how it is in retail – hours can go by without any customers coming in, so I used that time to write. The antiques dealer I worked for has retired now, but he’s very proud to be able to say that his former assistant has become a writer!

Yes, always, but I didn’t imagine making a career out of it. Life is full of surprises.

Proust, Modiano, Jean-Jacques Sempé, Shulz’s Peanuts, Alan Bennett, Billy Wilder, David Bowie… as you can see, it’s not only ‘writers’ ; the list of artists I admire is very long indeed.

I still collect objets d’art, like the hero of The Portrait (but without his means). Otherwise, I’m thinking of ideas for novels, or writing, with my cat on the sofa nearby. That’s what I’m doing right now. I’m halfway through a new novel, which I hope you’ll enjoy.

Time travel. I’d love to take a tour of Paris in the ’50s and see the France of Robert Doisneau’s photographs. And I sometimes wish I could switch places with my cat. I could curl up for a nap on the sofa while he did the writing. I’ve suggested it to him, but he hasn’t taken me up on it yet.

I try to read over my work in the morning and carry on writing in the afternoon. That’s the idea, but it doesn’t always turn out that way. When it’s not going well, I go and feed the ducks in the park near me. They haven’t seen too much of me recently, which is a good sign.

Not a lot, as I’m writing my own book.

Probably Small Pig by Arnold Lobel, which I read a lot as a child. It’s a masterpiece.