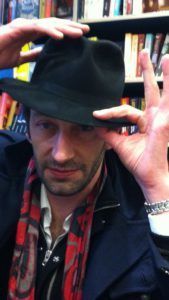 Where did the idea for The President’s Hat come from?

Possibly from losing my own hat! It happened a few years ago. The next morning, I went back to the café where I had left it and – it was nowhere to be seen. No one had handed it in. So my disappointment was coupled with a disconcerting realisation: that all the while I was trying to retrieve my hat, someone else in some other part of the city was wearing it. I hope it was a woman who did the deed, and that she’s pretty …

What made you decide to set your story in the 1980s?

I wanted to go back to my childhood and teenage years; the days before the internet, mobile phones, iPods and iPads and rap music, when there were only six TV channels to choose from. It’s the very recent past, but it feels like another age. The world has moved at an astonishing pace since the year 2000. Everything is happening so quickly – too quickly – and it’s speeding up all the time. I felt the need to take a step back. Judging by how well the book has been received, I wasn’t the only one.

The President is an iconic figure in the novel. Are you an admirer of Mitterrand, the man?

It’s difficult to imagine how anyone who was in France in the eighties could have failed to be impressed by the figure of Mitterrand, whatever their political persuasion: his noble profile; sphinx‐like silences; political manoeuvres worthy of a Florentine prince; his voice and, not least, his hat. He belongs to a breed of politician we will never see again. But remember this isn’t a political novel, rather, it should be read like a kind of fable. The President only appears at the beginning and end of the book.

There are other real‐life characters and actual events featured in the novel. Do you enjoy mixing the fictional and the real?

Very much. It’s a fundamental part of creative writing and especially so in the case of The President’s Hat. Some readers have even asked me if it was a true story! Perhaps it really did happen, without anyone knowing.

Your novel came out in France on the eve of the presidential elections in which François Hollande became the second socialist President of the Republic, following Mitterrand. How has French politics changed between the two presidencies?

Much has changed, not least the ways in which politicians present themselves to the public and their relationships with the media, but that’s not particular to France. What strikes me most is that it’s becoming less and less common to find political figures who stand out from the crowd. In the UK you had Margaret Thatcher, a very strong personality, who made a real impression on people in other countries. A true character. I remember coming to stay near Oxford for a language trip in ’86 or ’87 and the first thing the father of my host family said when I arrived was, ‘You’re so lucky to have Mitterrand in France,’ before adding mournfully, ‘We’ve got Margaret Thatcher …’ A few months later, I was reading an article in a French newspaper arguing that what we in France really needed was someone like … Margaret Thatcher! Whatever you think of their politics, there’s no doubt the two of them were huge personalities.

The story takes place in a world in which people communicate via Minitel; Canal +, answerphones and CDs are novelties. What impact do you think technology has on our lives today?

Technology has a lot going for it. For one thing, it means I can reply to these questions by email; I could even take a photo of the cat asleep on my lap and send it to you in less than a minute – something which would have been inconceivable not long ago. That said, I’m wary of technology’s apparently endless onward march. I preferred vinyl to virtual downloads and I very much hope the physical book continues to exist.

Destiny and magic play an important role in the plot … do you believe in them?

Certainly the former and quite possibly the latter. I’m going to take the liberty of quoting Vladimir Nabokov, whose words on the subject far exceed anything I might have to say. It comes from one of his lectures on literature given in the USA: ‘The truth is that great novels are great fairy tales … literature was born on the day when a boy came crying “wolf, wolf ” and there was no wolf behind him.’

You’re a film‐maker and antiques collector as well as a novelist. How do these other activities influence your writing?

My scriptwriting work has helped with the construction of my novels. You, the reader, should be carried seamlessly through the story with the impression of everything just flowing along naturally. In fact, it has all been constructed as carefully and painstakingly as a Rolls‐Royce engine. As for my collecting, that mostly influences my bank balance! Although my passion for objects, auctions and dealers did provide the material for my first novel, published in 2007 and entitled Ailleurs si j’y suis, which was the story of a collector. By a strange twist of fate, it was awarded the Prix Drouot, the literary prize founded by the famous Paris auction house.

Which authors have had the greatest effect on you?

There are so many writers I admire: Sacha Guitry, Céline and Modiano to name just a few. I’m a big fan of British detective fiction, which has also taught me a lot about the construction of novels. Not to mention cinema and the great film‐makers like Billy Wilder and Lubitsch. I’d also include Somerset Maugham’s short stories, which are astonishing and have hardly aged at all. And I recently discovered P. G. Wodehouse ’s Jeeves series – brilliant!

What’s the nicest thing anyone has said to you about The President’s Hat?

‘If only I had a president’s hat of my own!’ That’s something I’ve heard several times at book signings. It means that reading this optimistic novel has made people happy, which is praise enough for me.