An Introduction to Gide’s Vatican Cellars 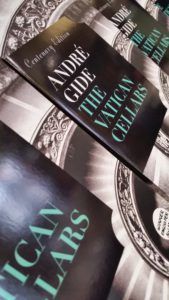 Les Caves du Vatican, first published in French in 1914 around the mid-point of André Gide’s writing career, was banned by the Roman Catholic Church along with Gide’s other works in 1952 – a year after the author’s death, and five years after he was awarded the Nobel Prize for Literature.

To those familiar with the austere tone and intense moral explorations of Gide’s earlier récits (short narratives), opening The Vatican Cellars to find a sprawling, rattling yarn may come as something of a surprise, as it did to many readers at the time. The book’s satirical treatment of the credulity of believers, whether reliant on religion or other doctrine, shocked many critics, while its existential questions and especially the concept of the gratuitous act inspired the likes of the Surrealists and Sartre and Camus. Yet for all the book’s perceived daring modernity, what is really striking looking back is just how funny it is.

Though it has continued to be available in the United States, where it is best known by the title Lafcadio’s Adventures after one of its most memorable characters (though by no means the only one to have adventures), the 1925 English translation by Gide’s contemporary and friend Dorothy Bussy has not been widely distributed in the UK for 25 years. This new translation by Julian Evans, which deliberately modernises the text in line with Gide’s own decision to adopt a more straightforward, vigorous style for the writing of the book, aims to bring this overlooked – and refreshingly light-hearted – classic to a larger audience in its centenary year.

Read about ‘The Vatican Cellars’ on ‘The TLS’

Posted on September 1, 2014 by Emily in Andre Gide, Gallic News