News > A very Proustian autumn, 100 years after his Goncourt win

A very Proustian autumn, 100 years after his Goncourt win 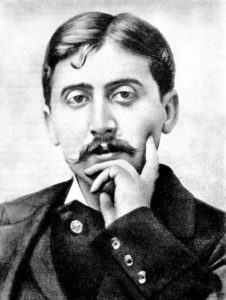 Calling all literature lovers! The BBC has recently announced that it will be broadcasting Marcel Proust’s In Search of Lost Time on Radio 4, in a ten-hour adaptation over the August Bank Holiday – a perfect way to spend a long weekend, soaking up some French culture without even leaving the comfort of your own home.

But, as is the case with all adaptations, this news does not come without controversy. Proust is famously complex, and Alex Clark noted in The Guardian the purists’ argument that ’10 hours barely scratches the surface of the modern era’s greatest series of novels’.

Similarly, Stéphane Heuet’s graphic novel adaptation of the first volume of A la recherche du temps perdu caused outrage when it was first published in France, branded ‘cruel’ and ‘blasphemous’ by one critic in Le Figaro. That didn’t stop it selling, though. Gallic published Harvard academic Arthur Goldhammer’s translation of Heuet’s Swann’s Way in 2016. A New York Times bestseller, it was hailed in the UK as ‘a Proust for everyone’ (The Observer) and shortlisted for the Oxford-Weidenfeld Translation Prize.

We are therefore delighted to announce that Gallic will publish In the Shadow of Young Girls in Flower in graphic novel form this December. The second volume of In Search of Lost Time was also the text that won Proust the prestigious Prix Goncourt in 1919.

The 112-page sumptuously illustrated graphic adaptation aims to encourage readers to explore beyond the famous madeleine moment and the Combray scenes of volume one. It follows the narrator as he enters adolescence and spends the summer with his grandmother at the beach resort of Balbec, where he will become enamoured of a group of girls including Albertine, one of the key figures of later volumes. The graphic novel offers an accessible opening to Proust for those daunted by the sheer size and complexity of his work, and gives a new perspective to those already familiar with the great French author. 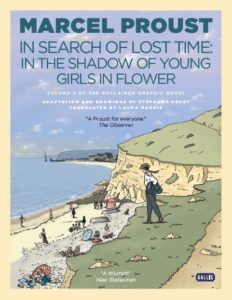 After failing to find a publisher, Proust had to publish the first volume of In Search of Lost Time at his own expense. In the Shadow of Young Girls in Flower was then picked up by Gallimard in 1919 (who had turned the first volume down, on the advice of André Gide), and won the Goncourt Prize the same year.

‘We are so pleased to be publishing this second graphic volume of In Search of Lost Time in such a Proustian year. The graphic novels are lovingly adapted by Stéphane Heuet with the approval of the Society of the Friends of Marcel Proust, and this second volume contains most of Proust’s key characters.’

So whether you’re a seasoned aficionado or just starting your journey, this year, there’s plenty of Proust to go around. Read it or listen along, the choice is yours.

The graphic novel of In the Shadow of Young Girls in Flower is available to pre-order now (£19.99).