Those of you who have already scrolled (all that long way) down the International Dublin Literary Award Longlist may have clocked two Gallic Books titles among the fantastic curation of fiction. Naturally, we think both books are more than deserving of their spot. This Mortal Boy by Fiona Kidman is a heartbreaking fictionalised account of a real life injustice, deemed ‘magnetic’ by the New York Times. Edward Carey’s weird and wonderful Little has been a Times Book of the Year and endorsed by the likes of Margaret Atwood and Gregory Maguire. So we believe our listings more than speak for themselves.

Instead, we thought we’d look through the rest of the collection and recommend some other books to try out, once you’ve enjoyed This Mortal Boy and Little of course… This list has been complied by Editorial Assistant Polly and Marketing Coordinator Isabelle. 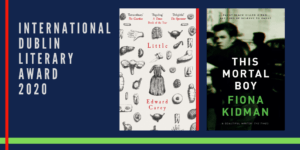 Madeline Miller won the Women’s Prize for her debut, The Song of Achilles, and Circe is a worthy follow up. The archetypal, bit-part witch of Greek mythology is re-imagined into a sympathetic, captivating and deeply humane being in her own right. Under Miller’s care, Circe’s story flourishes into a magical tale about overcoming pain, finding yourself and owning your power.

A bizarre and bleak novel that cuts deep and leaves you reeling. Milkman is the story of an unnamed protagonist in an unnamed country that is unmistakably Ireland, as it struggles through an unnamed conflict that is clearly coded to be the Troubles. Our heroine deals with dangerous, unwanted attention during a time of fraught mistrust and social conflict. A worthy winner of the 2018 Booker, Milkman demands a great deal of care and attention, but rewards you handsomely for your efforts.

Probably my favourite book of 2019, despite having read it in January. Sarah Moss is the master of depicting the quiet traumas of everyday lives, and Ghost Wall might be her finest work yet. In 150 pages Sarah Moss builds a chilling story around the ways in which we cling to misguided ideas about our past in order to find self-purpose and justify our cruelties to others. I read it in a single sitting and surfaced breathless.

My Sister the Serial Killer by Oyinkan Braithwaite

Fast-paced, funny and compulsively readable, My Sister the Serial Killer nevertheless touches on important themes of family duty, gender roles, and our expectations of beauty and romance. The novel somehow manages to strike a balance between a bawdy, black-humoured thriller, and a deeply thoughtful and challenging read.

Normal People is moving, intelligent and ever so slightly devastating. The novel is brought to life in Rooney’s writing, which is razor-sharp and feels incredibly current in its mix of intellectual snobbery and straight-talking intimacy. With the love story between Marianne and Connell at its heart, it’s a novel about relationships, identity, the choices we make – and their sometimes difficult repercussions. A bittersweet novel for bittersweet times.

The very first sentence hits you hard (‘The baby is dead. It took only a few seconds.’), a killer beginning if ever there was one. But as the book unfolds, Slimani weaves a complex story that touches on themes of motherhood, race and social class. A thoroughly chilling read, Lullaby dares to address the power structures that govern society and the resulting sense of isolation, which just might push some people over the edge…