News > 100 years of Michel Déon – and his most famous character

100 years of Michel Déon – and his most famous character 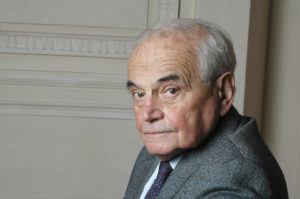 2019 marks 100 years since the birth of Michel Déon, one of the most eminent French writers of the twentieth century.

During his life, he wrote more than 50 books, including the classic The Foundling Boy, and was one of the few prestigious ‘immortels’ of the Académie française.

Perhaps his most famous novel, The Foundling Boy begins in the year of Déon’s birth, when a new-born baby is found on the doorstep of a childless couple in Normandy. They name him Jean and decide to raise him as their own. Déon takes the reader on a scintillating journey with Jean as he grows up and sets off on his bicycle around France, and then onto London and through a Europe that is rapidly changing…

In The Foundling Boy and its sequel, The Foundling’s War, Déon offers his readers the coming-of-age story of a boy as he learns about travel, friendships, love and the harsh realities of war. Déon narrates Jean’s story with a good dose of empathy and humour. It’s a fascinating personal insight into life in France and its transformation between the wars.

‘It is not just a glimpse into the past, but the study of the heart of a man and his times’ – Paul Theroux

In his 1973 novel Un taxi mauve, Déon turned his attention to a French expatriate living in Ireland. It was awarded the Grand Prix du Roman by the Académie française and was made into a film starring Fred Astaire and Charlotte Rampling.

His work took him to Switzerland, Italy, Greece and Portugal. He died in Galway in 2016 at the age of 97, having lived in Ireland for over 40 years with his wife and their 50 horses. His legacy lives on: the first Michel Déon Prize for non-fiction was presented by the Royal Irish Academy in December 2018, and will be awarded to writers living in Ireland and in France in alternating years.

Déon’s work has been highly praised by writers such as William Boyd and Paul Theroux. Described by TLS as ‘an outrageous storyteller, a most engaging tease’, 2019 might just be the year to discover (or rediscover) him.

Posted on May 2, 2019 by Polly in Coming-of-Age, Francophone Literature, Gallic Books, Literature in Translation, Michel Deon